On March 8, 2015, oligarch Lajos Simicska conducted interviews with the moderate pro-government website Mandiner and the opposition television station ATV. During the interview with Mandiner, Simicska suggested that Prime Minister Viktor Orbán may have provided Hungary’s communist-era intelligence services with information, perhaps as an enlisted informant, about him and others when they served in the Hungarian People’s Army together in the city of Zalaegerszeg (western Hungary, pop. 60,000) in 1981 and 1982.

Simicska indicated in the interview that files proving Orbán’s collaboration with communist-era intelligence services could have been taken to the Soviet Union at the time of the System Change and that President Vladimir Putin of Russia might be using them to blackmail the prime minister.

On the morning of February 6, 2015, the directors and chief editors of the pro-government television station, radio station and newspaper under the ownership of former Fidesz oligarch Lajos Simicska―Hír TV, Lánchíd Rádió and Magyar Nemzet―abruptly resigned, asserting that they had decided to leave their jobs “for reasons of conscience” (source in Hungarian).

The collective resignations infuriated Simicska, who learned of them only after their publication on the Magyar Nemzet website. En route to Budapest to appoint successors, the notoriously reclusive former oligarch conducted short telephone interviews with many of the major opposition media during which he accused the prime minister and his “entourage” of orchestrating the resignations (source in Hungarian) and denounced the prime minister in vulgar terms, frequently using an epithet denoting sperm—geci—that has no equivalent in English and might best be translated as “fuckhead.”¹

The direct cause of the resignations: on the evening of February 5, the website of the opposition newspaper Népszava quoted Simiscka, a longtime personal friend and political ally of Prime Minister Viktor Orbán, as saying “The media war could become full-blown if the government really introduces the five-percent advertising-revenue tax in the name of making peace with RTL” (source in Hungarian).

Simicska’s statement to Népszava referred to the Orbán government’s recent proposal to transform the progressive tax on advertising revenue, which generates over half of its proceeds from the television station RTL Klub, into a flat-rate tax that would redistribute the burden among a greater number of companies, notably Simicska-owned media and public advertising concerns (see source in Hungarian and Black Screen of Protest and The Big Gun Swings into Action).

The restructuring of the advertising-revenue tax would be one of several measures that the third Orbán government has taken since its formation last spring which have harmed the financial interests of Simicska, who generated much of his current wealth through state contracts awarded to his construction company, Közgép, at the time of the second Orbán government from 2010 to 2014 (see Lajos Simicska/Közgép).

The Simicska-owned media have attacked these measures and the government ministers identified directly with them, though have never criticized Prime Minister Orbán personally (see Cleft in the Monolith). The “full-blown” media war that Simicska cited in his statement to Népszava on February 5 would certainly entail lifting the taboo on direct criticism of Orbán―a presumption that the opposition website hvg.hu has corroborated, quoting an unnamed “reliable source” (source in Hungarian). If this hypothesis is correct, reluctance to participate in personal attacks on the prime minister constituted the “reasons of conscience” to which the formerly Simicska-affiliated journalists and media directors referred in their joint resignation.

By the evening of February 6, Simicska had named replacements for those who had resigned that morning, including himself as the director of Hír TV (source in Hungarian). Simicska told index.hu  “I am going to fire every Orbánist, then I will appoint my people in their place who cannot be bribed and intimidated. I will say it once again, my people will be sitting everywhere” (source in Hungarian).

The long steadfastly pro-Orbán Hír TV, Lánchíd Rádió and Magyar Nemzet therefore appear certain to become harsh critics of the prime minister and government. Below are quotes from Simicska’s February 6 interviews which may provide an insight into the type of criticism that his media are likely to articulate:

Believe it or not, my alliance with Orbán was based on the fact that we wanted to bring down the dictatorship and the post-communist system. This proved not to be an easy thing, it required a lot of work. But building another dictatorship in its place was certainly not a fucking part of this alliance. I am not a partner in this (source in Hungarian).

I grew up when the Soviet Union was here and I do not have good memories of the activities of the Ruskies in Hungary. I can’t make a clear distinction, to say the least, between the political behavior of the Soviets of that time and the Russians of today (source in Hungarian).

I imagined him [Orbán] to be a statesman who could do good for this country, but I had to realize that he’s not (source in Hungarian).

Naturally an independent media always deals with current things, though the Orbán government has ambitions to essentially abolish the independent media; but naturally this media―our media―will resist this and will not give a fucking shit about what Orbán wants (source in Hungarian). 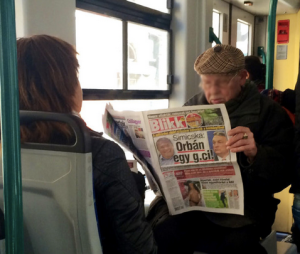 As for those who resigned from the Simicska-owned media on February 6: they are likely to find immediate employment at the state-run television and radio stations and news agency, which according to several sources, Prime Minister Orbán has chosen to serve as the primary channels of pro-government news (sources A and B in Hungarian). However, the owner of the pro-government television station Echo TV and newspaper Magyar Hírlap, Gábor Széles, wrote on his Facebook site on February 7 that he will gladly hire any of them who do not find employment at the state-run media (source in Hungarian).

The nearly certain anti-Orbán transformation of Hír TV, Lánchíd Rádió and Magyar Nemzet would represent the most sudden and radical change in Hungary’s political media landscape in the 35 years since the end of the Hungarian Socialist Workers’ Party dictatorship.This transformation would serve to further elevate the already heightened degree of political tension and conflict in Hungary. And its outcome would almost certainly entail either the collapse of the Orbán government or that of the Simicska-owned business and media empire—more likely the latter.

¹ “Orbán is a fuckhead!” (source in Hungarian)

“Yes, I stand by it: he’s a fuckhead. Maybe I will retract it tomorrow morning, because I am already calming down, but now you can go ahead and write that he is a fuckhead.” (source in Hungarian)

On September 4, 2014, the following exchange took place between a reporter from the pro-government television station Hír TV and Prime Ministry State Secretary László L. Simon during a press conference held at the second official opening of the Castle Garden Bazaar (Várkert Bazár) in Budapest (source in Hungarian):

Hír TV reporter: This is the second time you have opened it, despite this visitors still have to stumble over a construction site. When will it really be finished?

State Secretary L. Simon: (extended pause) . . . I would predict about two- or three-hundred years or so.

Hír TV reporter: That is a long-range plan. Who is going to finance it?

State Secretary L. Simon: The question is rather who is going to oversee it and if Hír TV will be in a position to report about it in two-, three-hundred years.

Hír TV and the pro-government newspaper Magyar Nemzet, which operate a joint website, reported that State Secretary L. Simon had warned the television station’s journalist in person after the press conference that “If you continue to ask questions like that life will be hard at Hír TV.”

State Secretary L. Simon did not deny making this statement.

The front page of the print edition of Magyar Nemzet on September 5 featured a menacing photo of State Secretary L. Simon under the headline “They Threatened Hír TV.”

This confrontation between Prime Minister’s Office State Secretary L. Simon and the Hír TV reporter represents the most explicit public manifestation yet of the greater conflict taking place mostly behind the scenes between the Orbán government and the Lajos Simicska-led Fidesz oligarchy that gained control over the state-affiliated sectors of Hungary’s economy during the 2010–2014 parliamentary cycle.

Prime Minister Viktor Orbán launched this battle under the direct command of newly appointed National Development Minister Miklós Seszták following the National Assembly election in April 2014 in an attempt to reduce the enormous economic-cum-political power that the Fidesz oligarchs had attained over the previous four years (source in Hungarian).

The Orbán government has utilized economic weapons in this struggle, suspending the authority of state-owned companies to conclude new contracts without prior permission from the National Development Ministry (source in Hungarian) and initiating a new tax on advertising revenue and other measures that specifically serve to reduce the profits of Lajos Simicska-owned companies and media, which not incidentally include both Hír TV and Magyar Nemzet (see Lajos Simicska/Közgép).

This is not the first internal conflict that has taken place within Fidesz since the party returned to power in 2010: the establishment of the state monopoly on the retail sale of tobacco and the adoption of the Land Law in June 2013 both entailed instances of high-profile individual dissent from Orbán administration officials (see Cracks in the Monolith); and a large number of National Assembly representatives from the Fidesz-Christian Democratic People’s Party governing alliance defied the Orbán administration’s opposition to a legislative bill introduced in 2012 calling for access to communist-era domestic-intelligence files to be opened all citizens of Hungary (see Communist-Era Domestic Intelligence Files).

However, it is by far the most serious one.

The question is: will this conflict grow to significantly undermine the unity and power of Fidesz or will Prime Minister Orbán manage to bring party oligarchs under control, just as President Vladimir Putin did in Russia during the early 2000s?

Orange Files believes the latter alternative to be much more likely.