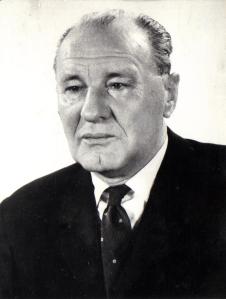 The Hungarian Socialist Workers’ Party (HSWP) maintained a Marxist-Leninist state in Hungary  from the suppression of the 1956 Hungarian Revolution until the collapse of communism and declaration of the Third Hungarian Republic in 1989.

Under the leadership of General Secretary János Kádár, the Hungarian Socialist Workers’ Party gradually introduced political and economic reforms that resulted in the establishment of a relatively liberal system of government known informally as Goulash Communism. The Kádár-led HSWP nevertheless remained a loyal member of Soviet Bloc economic, political and military organizations such as the Council for Mutual Economic Assistance (Comecon) and the Warsaw Pact.

During the 1970s, the Kádár government relied increasingly on loans from Western banks to finance the material incentives that constituted  an essential element of Goulash Communism.