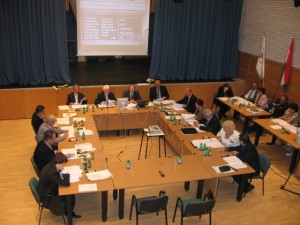 Municipal council meeting in the town of Hévíz.

Local government in Hungary is composed of municipal councils and mayors for all villages, towns and cities in the country, including the 23 districts of Budapest, as well as general assemblies for all of its 19 counties (megye) and the city of Budapest. Local-government elections are held every four years during the autumn following regular spring National Assembly elections.

Local-government elections were most recently held in Hungary on October 12, 2014. Candidates from the Fidesz–Christian Democratic People’s Party (KDNP) alliance dominated 2014 local elections in towns and cities, including Budapest, as well as at the county level, while—as customary—nominally independent candidates dominated these elections in small towns and villages. 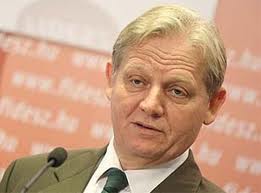 Members of the Fidesz-KDNP alliance serve as mayor in 17 of the 19 cities in Hungary with over 50,000 inhabitants, including Budapest, where István Tarlós has been head of the municipal government since 2010. Non–Fidesz-KDNP mayors therefore lead only two cities with over 50,000 inhabitants: László Botka of the Hungarian Socialist Party in Szeged (southern Hungary, pop. 162,000); and Jobbik-supported independent Péter Szarvas in Békéscsaba (southeastern Hungary, pop. 60,500).

Amendments to conflict-of-interest laws adopted during the 2010–2014 parliamentary cycle prohibit  members of the government or National Assembly from simultaneously serving as mayors. As a result of these amendments, Prime Ministry chief János Lázár resigned from his office as mayor of Hódmezővásárhely (southern Hungary, pop. 45,000) in 2012, while Fidesz National Assembly caucus Chairman Antal Rogán and Executive Vice-President Lajos Kósa resigned from their positions as the mayors of Budapest Fifth District and the city of Debrecen (eastern Hungary, pop. 204,000), respectively, in 2014 (source in Hungarian). 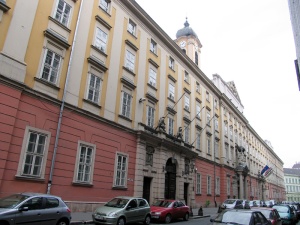 Members of the Fidesz-KDNP alliance hold a total of 1,152 seats on municipal councils in towns and cities with more than 10,000 inhabitants, while members of Jobbik hold 215 seats and those of various other parties and party alliances hold 911 seats.

Members of the Fidesz-KDNP alliance hold 20 of the 33 seats on the Budapest municipal council, while the Hungarian Socialist Party holds six seats either independently or in alliance with other opposition parties and other parties hold the remaining seven seats.

Independents hold 12,801 seats—or 87.9 percent of all seats—on municipal councils in towns and villages with fewer than 10,000 inhabitants, while members of the Fidesz-KDNP alliance hold 1,263 seats, members of Jobbik hold 157 seats and members of other parties and party alliances hold 340 seats.