The Hungarian Parliament Building in Budapest.

Eight parties currently seat representatives in the National  Assembly: governing parties Fidesz and the Christian Democratic People’s Party and opposition parties Jobbik, the Hungarian Socialist Party, the Democratic Coalition, Politics Can Be Different, Dialogue for Hungary and Together.

The National Assembly has customarily held plenary meetings on Monday afternoon and Tuesday morning of each week during the legislature’s three-and-a-half-month regular sessions. National Assembly committees then meet on Wednesday and Thursday.

On April 16, 2012, Fidesz-KDNP Naional Assembly representatives adopted Law XXXIV of 2012 regarding the legislature’s organizational, procedural and other regulations. This law stipulated three main changes to the National Assembly’s former regulations: first, the law prohibited representatives from engaging in outside paid work, including other state jobs, most significantly that of mayor, beginning with the 2014 parliamentary cycle; second, the law raised the base pay of representatives to 750,000 forints per month (2,518 euros per month on the date on which the law was passed) from 232,000 forints per month, though eliminated supplementary pay for committee membership, also beginning with the 2014 parliamentary cycle; and third, the law established the armed Parliamentary Guard (Országgyűlési Őrség) to oversee security at the Hungarian Parliament Building (source in Hungarian).

According to Hungarian political-research institute Policy Solutions, the increased base salary of National Assembly representatives in Hungary was still only the 20th-highest among parliamentary representatives from the 27 member states of the European Union in absolute terms, though was the 5th-highest among those in all European Union member states when compared to average national-income (source in English). 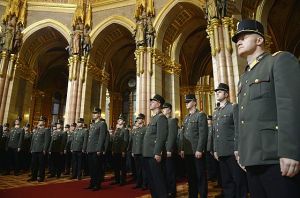 On December 17, 2012, Fidesz-KDNP National Assembly representatives adopted an amendment to body’s procedural regulations authorizing the legislature to fine representatives up to one-third of their monthly salaries based on the recommendation of the speaker if they utilized language or other forms of expression in the course of parliamentary debate or committee meetings that represented a “flagrant insult” to the authority of the National Assembly or to the dignity of an individual or group, particularly that of a national, ethnic, racial or religious group (source A and B in Hungarian). 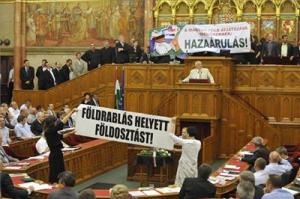 Jobbik and Politics Can Be Different representatives protest the new Land Law.

During voting on the new Fidesz-KDNP-supported Land Law on June 21, 2013, nearly all the members of the Jobbik caucus occupied the speaker’s platform and displayed a sign reading “Passage of Hungarian Land into the Hands of Foreigners: Treason!” (A magyar föld átjátszása idegeneknek: hazaárulás!) while chanting “traitors!” (hazaárulók). Meanwhile Politics Can Be Different (LMP) representatives displayed a sign reading “Land Distribution Instead of Land Robbery!” (Földrablást helyett földosztást!) while shouting criticism of the law through a megaphone (source in Hungarian).

Speaker László Kövér asserted after the incident that the Jobbik-LMP protest had been aimed at forcing him to call upon the intervention of the Parliamentary Guard in order to restore order in the session chamber, adding that “I will not do [them] that favor.” Kövér claimed that there had not been such a big disturbance inside the Hungarian Parliament Building since an opposition representative fired three wayward shots at Prime Minister István Tisza inside the session chamber in 1912 (source in Hungarian). Other commentators compared the Jobbik-LMP protest against the Land Law rather to the opposition’s destruction of benches and tables at the National Assembly session chamber in 1904 to protest Prime Minister Tisza’s violation of parliamentary procedure in the course of the so-called “handkerchief vote” in order to enact new regulations aimed at breaking filibusters (source in Hungarian).

The National Assembly subsequently fined 40 Jobbik representatives and three Politics Can Be Different representatives for their participation in the protest (see details below).

On February 13, 2014, National Representatives from the Fidesz-KDNP party alliance approved new National Assembly procedures to come into effect at the beginning of the 2014–2018 parliamentary cycle. The amendments to Law XXXIV of 2012 stipulate the following changes (source in Hungarian):

-authorizes National Assembly representatives to decide how often to meet during the annual three-and-a-half-month sessions;

-prohibits representatives from displaying “visual aids” (szemléltető eszköz) during plenary sessions of the National Assembly unless the legislature’s procedural committee approves them beforehand;

-and requires National Assembly representatives to stand when the speaker enters the session chamber.

National Assembly Speaker László Kövér made several statements in the September of 2013 suggesting that the government should assume some of the legislative duties of the National Assembly through the proclamation of decrees.

Köver said during an interview on InfoRádio on September 9, 2013 (source in Hungarian):

I would consider it normal regardless of what kind of governments there will be in the coming cycles if parliament would maintain its prerogative to frame only the most fundamental laws and would provide the government with authority for four years.

Kövér also said during the interview (source in Hungarian starting from minute 21:00):

It would be worth considering over the long-term if it wouldn’t be good to give the government a greater mandate, greater room to maneuver so that it can react to the everyday challenges and vibrations of life and to relax the obligation of the legislative branch stemming from the mistrust and suspicious attitude toward authority in the post-dictatorial period . . . . As a result of this, a practice emerged that we want to regulate everything according to law. . . .

Kövér told the newspaper Zalai Hírlap in an interview published on September 11, 2013 (source in Hungarian):

It is the duty of the legislative branch to regulate basic living conditions. The question is what constitutes “basic.” The way I see it today, the Hungarian legislative branch exceeds the optimal boundaries both in terms of the designation of legislative subject-matter as well as the detail with which certain legislation is addressed. After more than two decades of experience as a National Assembly representative I can say that it would be worth it for us to commit ourselves to having the parliament leave the government greater room to maneuver and to not want to regulate everything by law and devote more of its energies to oversight of the executive branch for which it has very little energy now, just as over the past twenty years. Therefore require the government to give account of its work more frequently, be more strict in following how it has used the authority that it received. This could only be called “government by decree” within quotation marks.

Removal of the European Union Flag from the Session Chamber

National Assembly Speaker Kövér ordered the removal of European Union flags that Hungarian Socialist Party representatives erected alongside Hungarian flags in the National Assembly session chamber on several occasions in November 2014 (source A and B in Hungarian). After having such a flag removed on November 17, Kövér said “I understand that my socialist fellow representatives can always only bear the Hungarian national flag together with a flag of another color, either red or blue—but this is the Hungarian national parliament” (source in Hungarian).

“You Steal, You Cheat, You Lie!” Dialogue for Hungary representatives protest an amendment to the National Tobacco Shop Law in May 2013.

On September 16, 2014, the European Court of Human Rights in Strasbourg, France, ruled that the fines imposed on Szilágyi, Karácsony, Dorosz, Szabó, Osztolykán, Szél and Lengyel for displaying protest signs in the National Assembly in May and June of 2013 had violated Article 10 of the European Convention on Human Rights guaranteeing the freedom of expression. The Council of Europe court—not to be confused with the EU’s European Court of Justice also located in Strasbourg—ordered the state of Hungary to pay damages of 4,250 euros each to Szilágyi, Karácsony, Dorsz and Szabó and 4,370 euros each to Osztolykán, Szél and Lengyel as well as total court costs of 10,500 euros (sources A and B in English).

The European Court of Human Rights upheld the above verdict in May 2016 following an appeal from the state of Hungary (source in Hungarian).