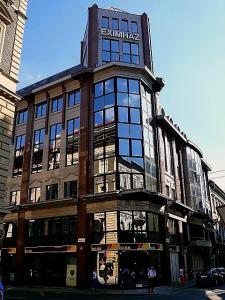 The National Assembly approved a law in 1994 establishing the Hungarian Export-Import Bank (Magyar Export-Import Bank, or Eximbank) in order to provide financing for the foreign-trade activities of companies operating in Hungary. Eximbank operates under the direct authority of the Ministry of External Economy and Foreign Affairs (source in Hungarian)

Eximbank is based in Budapest and operates offices in eight other towns and cities in Hungary (source in Hungarian).

In September 2014, National Assembly representatives from the Fidesz–Christian Democratic People’s Party alliance and the nationalist party Jobbik voted to amend the law governing the operations of Eximbank in order to make it possible for party officials to serve as the CEO of the bank and to sit on its board of directors and supervisory board (source A, B and C in Hungarian).

These amendments also permitted Eximbank to grant loans to support the investments of companies based in Hungary aimed at “improving their international competitiveness” (source in Hungarian).

Financing the Operations of Eximbank

Eximbank also sold a total of one billion dollars and 400 million euros in state-guaranteed bank bonds in three auctions held in December 2012, September 2013 and September 2014 in order to finance its operations (source A, B and C in Hungarian).

On July 18, 2013, National Economy Minister Mihály Varga announced that the Hungarian Export-Import Bank had concluded an agreement with the Chinese Export-Import Bank  for 100 million euros in loans to finance the expansion of exports to China from companies operating in Hungary (source in Hungarian).

On November 26, 2013, officials from the Chinese and Hungarian Eximbanks announced that they had signed an agreement to add a further 100 million euros to the already depleted credit line (source in Hungarian).

In 2015, Eximbank provided 6.7 billion forints in loans to the Andy Vajna–owned Magyar Broadcasting Co. in order to help finance the company’s purchase of commercial television station TV2 (source in Hungarian). This television station has since become a vehicle for the dissemination of government propaganda under the supervision of the Prime Minister Orbán’s unofficial chief strategic adviser Árpád Habony (source A, B, C and D in Hungarian).

In early 2016, Eximbank provided Orbán government oligarch István Garancsi with a 16.5-billion-forint (52.4-million-euro) loan to purchase the 56-hectare Kopászi Dam recreation area located on a peninsula along the Danube River in Budapest from three Portuguese companies (sources A and B in Hungarian).