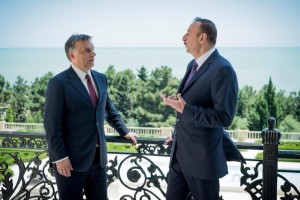 On September 14, 2010, Prime Minister Viktor Orbán traveled to Baku, Azerbaijan, to attend the Azeri-Georgian-Romanian-Hungarian Energy Summit, the first trip he made to a non-European country after becoming prime minister of Hungary for the second time in May of that year.

During the summit, Prime Minister Orbán, President Ilham Aliyev of Azerbaijan, President Mikheil Saakashvili of Georgia and President Traian Băsescu of Romania signed the Baku Declaration proclaiming the intention of the four countries to build the Azerbaijan-Georgia-Romania Interconnector (AGRI) to transport gas from Azerbaijan to Georgia, where it would be liquefied and shipped in LNG tankers across the Black Sea to Romania, then transformed back into gas and transported to Hungary via the Arad-Szeged Gas Pipeline (source in English). 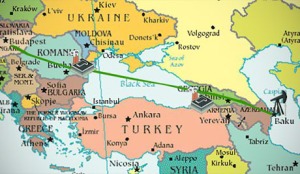 The Orbán government views the AGRI interconnector as one of the potential means of obtaining gas from the Shah Deniz gas field located in the Caspian Sea about 70 kilometers from the Ajerbaijan’s capital city Baku. This gas field, which began production in 2006, is the largest in Azerbaijan. Gas extracted from the Shah Deniz field is transported from Azerbaijan through Georgia to Turkey via the South Caucuses Pipeline.

The Orbán government regarded the proposed Nabucco-West Gas Pipeline as another of the primary possible means of transporting gas from the Shah Deniz field to Hungary. The Nabucco-West pipeline was planned to run from Turkey through Bulgaria, Romania and Hungary to Austria. Prime Minister Orbán traveled to Azerbaijan for a second time on June 30, 2012, in order to promote the establishment of as many possible sources of Azeri gas for Hungary as possible (source in Hungarian).

However, in June 2013, the Shah Deniz Consortium, led by Britain’s BP and Norway’s Statoil, chose to transport gas extracted from the field to Europe via the planned Trans Adriatic Pipeline to run from Turkey through Greece and Albania and across the Adriatic Sea to Italy rather than through the proposed Nabucco-West pipeline. Hungary’s National Development Ministry that the Shah Deniz Consortium’s decision in favor of the Trans Adriatic Pipeline over the Nabucco-West pipeline would compel Hungary to focus on obtaining gas from the Shah Deniz field through planned and existing pipelines and interconnectors (source in Hungarian) 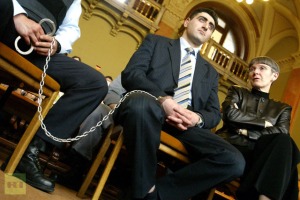 Ramil Safarov during his murder trial in Budapest.

On February 19, 2004, Azerbaijani Army Lieutenant Ramil Safarov murdered Armenian Army Lieutenant Gurgen Margaryan with an axe as he was sleeping at the dormitory in which the two officers were staying while in Budapest to attend a NATO-sponsored three-month English-language course for military personnel from states participating in NATO’s Partnership for Peace Program (source in English).

Safarov said during his subsequent trial that he murdered Margaryan in order to gain revenge for the Armenian Army lieutenant’s alleged insult of the Azerbaijani flag and for the deaths of compatriots killed during the war between Azerbaijan and Armenia over the disputed Nagorno-Karabakh region fought from 1988 to 1994.

On April 13, 2006, the Budapest Municipal Court convicted Safarov of first-degree murder, sentencing him to life in prison without the opportunity for parole for thirty years.

On August 31, 2012, the Orbán government extradited Safarov to Azerbaijan pursuant to the 1983 Convention on the Transfer of Sentenced Persons authorizing repatriation of convicts incarcerated in foreign countries to serve their prison sentences in their native countries. However, when Safarov arrived from Budapest to Heydar Aliyev International Airport in Baku he encountered not law-enforcement officials prepared to take him to prison, but a greeting party led by Azerbaijani President Ilham Aliyev that hailed him as a hero. President Aliyev immediately pardoned Safarov for the murder of Margaryan, while Azerbaijan’s defense minister promoted him to the rank of major in the Azerbaijani Army and granted him an apartment in Baku and retroactive military pay for the eight years he spent in prison in Hungary (source in English) 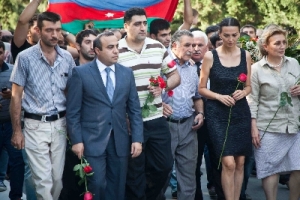 On September 5, 2012, Foreign Ministry State Secretary Zsolt Németh of Hungary said that although Azerbaijan’s government has issued assurances that Safarov would serve the remainder of his prison sentence in Azerbaijan, the Orbán government was aware that the convicted murder could receive a presidential pardon following his extradition from Hungary (source in Hungarian).

On the same day, Foreign Minister János Martonyi of Hungary said that the Azerbaijani government had promised that it would not pardon Safarov after his extradition, characterizing the pardon as “Infinitely unfortunate, unacceptable and reprehensible” (source in Hungarian).

Unnamed government sources told the news website origo.hu that Prime Minister Orbán had made the decision to extradite Safarov in order to gain bond purchases that would promote stronger economic and financial relations between Hungary and Azerbaijan (source in Hungarian). Prime Minister Office’s State Secretary in Charge of Foreign and External Economic Affairs Péter Szijjártó denied that the government had decided to extradite Safarov as part of a deal to gain previously rumored Azerbaijani purchases of Hungarian government bonds (sources A and B in Hungarian)

The European Union, the United Nations, NATO and several western governments condemned President Aliyev’s pardon of Safarov, though refrained from criticizing the Orbán government’s role in the affair. However, the government of Armenia immediately suspended diplomatic relations with Hungary as a result of Safarov’s extradition and Armenians both in Armenia and throughout western Europe and north America held anti-Azerbaijani and -Hungarian demonstrations to protest Safarov’s release from prison.

On October 9, 2012, the Orbán government announced that it considered the Safarov affair to be closed (source in Hungarian).

On November 29, 2012, the Orbán government hosted an “international conference” in Budapest to commemorate the 20th anniversary of the establishment of diplomatic relations between Hungary and Azerbaijan in 1992, one year after the latter country gained independence following the breakup of the Soviet Union (source in Hungarian).

Opening in Azerbaijan of the First Hungarian Trade House

On November 11, 2014, Prime Minister Viktor Orbán and President Ilham Aliyev signed a strategic-partnership agreement in Budapest. This agreement pertained to eight fields of cooperation, including energy, education, civilian air transport, tourism, veterinary medicine and youth and sports (see source A and B in Hungarian).

Prime Minister Orbán said in connection with the agreements that the conditions must be established so that gas can be exported from Azerbaijan to central Europe. President Aliyev stated after signing the agreements that “Not only are our economic relations strong, but our political relations as well. You [Prime Minister Orbán] have already visited Baku twice and I have visited Budapest three times. This clearly shows the high level of our cooperation” (source in Hungarian).

The agreement regarding education stipulated that 200 Azeri students would receive scholarships to study at institutions of higher education in Hungary and called for investigation of the possibility of establishing a Hungarian university in Azerbaijan.

Several further agreements were concluded at the Hungarian-Azeri Business Forum also held in Budapest on November 11, 2014, including one calling for the Lajos Simicska-owned construction company Közgép to build highway bridges in Azerbaijan (source in Hungarian). 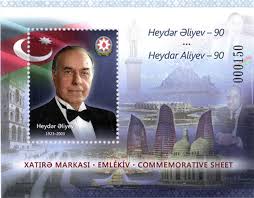 On May 8, 2013, the Azerbaijan State News Agency AzerTAc reported that the Azerbaijani embassy in Budapest and Hungarian postal service Magyar Posta had jointly issued a commemorative stamp honoring the 90th anniversary of the birth of Azerbaijan’s former president Heydar Aliyev (source in English). Two days following this announcement, Magyar Posta denied that it had participated in the issue of the commemorative stamp portraying the former leader of Azerbaijan widely known for his corruption and cult of personality (source in Hungarian).

On June 15, 2013, Magyar Posta announced that it had issued a joint commemorative stamp with the embassy of Azerbaijan in Budapest portraying folk images of a peacock and a horse (source in Hungarian).

On February 8, 2013, Prime Minister Office’s State Secretary in Charge of Foreign and External Economic Affairs Péter Szijjártó announced that the government of Azerbaijan had added nine more Hungarian universities to the list of foreign universities at which Azeri students could study with state support, thus increasing the total number of such universities in Hungary to ten (source in Hungarian).

On April 11, 2013, Wizz Air Hungary Airlines announced that it would launch twice-weekly flights between Liszt Ferenc Airport in Budapest and Heydar Aliyev International Airport in Baku, the first regular direct flight between Hungary and Azerbaijan. The announcement followed months of negotiations between the governments of Hungary and Azerbaijan.