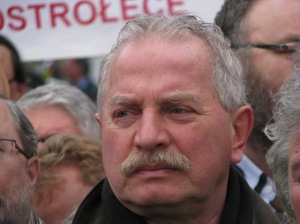 András Bencsik is the editor-and-chief of the pro–Orbán government weekly Magyar Demokrata and is one of the main organizers of the Peace March demonstrations (Békemenet).

Born and raised in Budapest. Attended the Kálmán Kandó Electrical Industry Technical College in the first half of the 1970s. Completed studies at National Federation of Hungarian Journalists Page Setting and Photo Editing Academy.

Served deputy edtor-in-chief at pro-Hungarian Democratic Forum (HDF) daily Pesti Hírlap from 1990 to 1994. Was a member of the Christian-nationalist HDF, the first governing party in post-communist Hungary, from 1993 to 1994.

Established the nationalist news magazine Magyar Demokrata in 1994. Has served as the weekly’s editor-in-chief since its foundation.

Was one of founders of now banned (Magyar Gárda) in 2007 (see New Hungarian Guard).

Has served as one of the main organizers, along with fellow journalist Zsolt Bayer, businessman Gábor Széles and the Civil Cooperation Forum organization, of the pro–Orbán government Peace March demonstrations held in Budapest since January 2012.

Founder of the radical-nationalist Szkítia book stores located in Budapest.