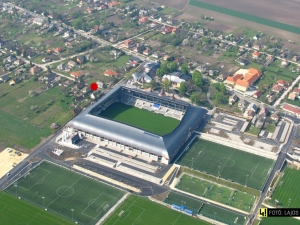 The Orbán government has launched an unprecedented campaign to build and renovate football stadiums in Hungary since coming to power in 2010. The first of the 32 stadiums to be built and renovated as part of this campaign was opened across the street from the weekend house of Prime Minister Viktor Orbán in his home village of Felcsút in April 2014 (see One Man’s Plaything).

According to the opposition website Átlátszó.hu, the Orbán government has spent 40.2 billion forints (around 130 million euros) on the seven football stadiums completed by June 2016 (source in Hungarian). The website estimates that the government will spend a total of 215 billion forints on all 32 stadiums scheduled to be built or renovated by the year 2020 (source in Hungarian).

Below is an Orange Files table showing current or completed stadium-construction and -renovation projects in Hungary based on information from the opposition website 444.hu (source in Hungarian). The aggregate cost of the 28 stadiums shown in the table is 213.7 billion forints, which includes private funding. The completion years in bold indicate stadiums that have been opened as of June 2016.