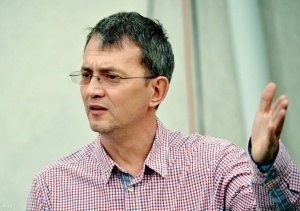 István Garancsi is one of the most powerful business oligarchs in Hungary.

Garancsi is the owner of the division-one Hungarian football club Videoton FC, the Mobil Adat company that markets the SIM card needed to make the obligatory connection between cash registers and Hungary’s National Tax and Customs Authority, the construction company Market Építő and the ESMA outdoor-advertising company, among others.

Garancsi reportedly became friends with Viktor Orbán as he and the former and future prime minister of Hungary sat in the VIP box watching Videoton FC football matches at the club’s stadium in Székesfehérvár after Garancsi purchased the club in 2007 (source in Hungarian).

Garancsi ranked number 19 on the Forbes list of the 33 richest people in Hungary in 2017 with estimated wealth of 48.7 billion forints, or around 157 million euros (source in Hungarian).

Through June 2016, Market Építő had won over 15 billion forints in state contracts to build football stadiums in Hungary as part of the Orbán government’s stadium-construction campaign (source in Hungarian).

Over recent years, Magyar Építő has also won public tenders to implement a 32.7-billion-forint expansion of the Budapest Zoo and to build the 43.4-billion-forint Danube Arena, the main venue for the 2017 World Aquatics Championships held in Budapest (sources A and B in Hungarian).

In the one-year period from September 2016 to September 2017, Garancsi’s outdoor-advertising company Esma generated revenue of slightly over one billion forints through the display of government publicity connected to its national referendum on European Union migrant-resettlement quotas, “Hungary Is Getting Stronger” campaign and “Let’s Stop Brussels!” and “Soros Plan” national consultations (sources A, B and C in Hungarian).

Seventh Most Influential Person in Hungary