Habony is regarded as the architect of many of the Orbán government’s main policies, notably the 2013 public utility-fee cuts and the 2015 anti-migration campaign (source in Hungarian; see Hungary and the Great Migration).

Habony is regarded as one of the most influential business oligarchs in Hungary.

Habony ranked either number four or number six in the annual napi.hu Influence Barometer of the 50 most powerful people in Hungary during the five-year period 2014–2018 (source in Hungarian).

Habony reported to Hungary’s National Tax and Customs authority in 2016 that he had derived most of his income between 2009 and 2013 via loans from Orbán government commissioner and oligarch Andy Vajna and former Orbán government security adviser András Tomba (source in English).

Lokál generated an estimated 1.5 billion forints (4.8 million euros) in revenue through the publication of advertisements for state-owned companies, notably lottery company Szerencsejáték and the Hungarian Electrical Works (Magyar Villamos Művek), during the newspaper’s first year of operation (source in Hungarian).

Lokál began appearing daily in June 2016 (source in Hungarian). Former Orbán ally Lajos Simicska therefore ceased publication of his free Budapest daily newspaper Metropol, which had generated billions of forints in revenue through the publication of advertising for state-owned companies before his dramatic split with the prime minister in February 2015 (source in Hungarian; see also The Fury of an Oligarch Scorned).

Modern Media Group began publishing the weekly Lokál Extra immediately following the conversion of Lokál into a daily in June 2016.

Lokál and Lokál Extra derived 3.4 billion forints—or just over 65 percent—of their combined 2017 advertising revenue of 5.2 billion forints from the publication of government and state advertisements (source in Hungarian).

The Prime Ministry, the Hungarian Electrical Works and Szerencsejáték published over 2.6 billion forints worth of advertising in Lokál and Lokál Extra in 2017 (source in Hungarian).

On November 28, 2018, Habony transferred ownership of Modern Media Group to the Central European Press and Media Foundation (Közép-Európai Sajtó és Média Alapítvány, or KESMA) without financial compensation (sources A in English and B in Hungarian).

Opposition media have linked Habony to two offshore intermediary companies that participated in the Orbán government’s Hungarian Investment Immigration Program from 2013 to 2017 (sources A, B, C and D in Hungarian).

The eight intermediary companies that were involved in the Hungarian Investment Immigration Program generated a total of 156.2 billion forints in revenue from the sale of so-called “residency bonds” through the program (source in Hungarian).

In December 2014, Minister in Charge of the Prime Ministry János Lázár revealed that he regularly sought advice from Habony, marking the first time that an Orbán government official had acknowledged Habony’s advisory role.

Lázár told the television station RTL Klub, “I know Árpád Habony, we meet regularly. I ask for his opinion on certain questions, though I have no advisory or official relationship with him. I consult with him based on personal acquaintanceship. I have no knowledge that he has any contract with the government” (source in Hungarian).

However, Prime Minister Orbán and members of his entourage have remained reluctant to discuss Habony’s advisory role. In February 2016, for example, government Spokesman Zoltán Kovács abruptly ended a press conference in order to avoid responding to a question regarding Habony (source in Hungarian).

On June 6,2016, Jobbik National Assembly representative János Volner asked Prime Minister Viktor Orbán “Who is Árpád Habony?” Prime Minister Orbán responded by reading the following statement from a paper: “I did not find the name of the person in question on the payroll of a single government institution or state company, therefore I am not qualified to answer the question” (source in Hungarian). 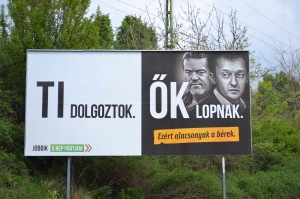 In September 2017, Jobbik announced that the Budapest Court of Appeals had rejected Habony’s claim that he could not be regarded as a “public figure” (közszereplő) and thus the party had unlawfully displayed his face on its signs (source in Hungarian).