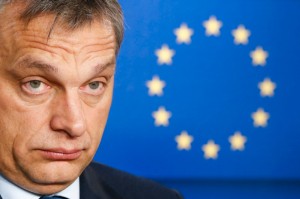 The European Union places member states whose government deficit exceeds 3 percent of GDP under an Excessive Deficit Procedure (EDP) aimed at compelling them to bring their budget shortfalls under this threshold. The European Union maintained an EDP against Hungary from the time the country joined the EU in 2004 until June 21, 2013.

On January 11, 2012, the European Commission (EC) proposed that the Excessive Deficit Procedure be maintained against Hungary in spite of preliminary data showing the country would have a budget surplus in 2011 on the grounds that without the takeover of private pension funds, Hungary would have had a significant budget deficit that year. The Economic and Financial Affairs Council (Ecofin) composed of the finance or economy ministers of all 27 member states approved this proposal on January 24, 2012.

The EU Suspends Much of Hungary’s 2013 Cohesion Fund Support

On February 22, 2012, The European Commission proposed that the EU suspend 29 percent of Hungary’s 2013 Cohesion Fund subsidies of 1.7 billion euros. (European Union Cohesion Funding is allocated to members states whose GDP is below 90 percent of the EU average in order to finance investments to improve infrastructure and protect the environment.) The EC based this decision on its previous conclusion that Hungary’s 2011 surplus had been the result of the takeover of private pension-funds and its forecast of renewed deficits in 2012 and 2013. This marked the first time that the European Commission had ever initiated the suspension of the Cohesion Fund subsidies of an EU member state.

On March 13, 2012, the Economic and Financial Affairs Council approved the EC’s proposal to suspend 495.2 million euros of Hungary’s 2013 Cohesion Fund support, stating that the suspension would be lifted if the Orbán government enacted measures by September 13, 2012 to trim one-half percent from its 2012 budget deficit in order to meet the targeted 2.5 percent of GDP and to ensure that its 2013 budget deficit remained below the three-percent-of-GDP threshold.

On April 23, 2012, National Economy Minister György Matolcsy announced the Kálmán Széll Plan 2.0, an updated version of the original Kálmán Széll Plan introduced on March 1, 2011. The deficit-reduction plan called for the introduction of new taxes on bank transactions, on mobile telephone calls and text messages and a rise in the so-called Robin Hood tax on the revenue of energy companies operating in Hungary to 16 percent from 8 percent, among other measures. The new and increased taxes would generate government revenue of 150 billion forints in 2012 and around 600 billion forints in 2013, thus enabling Hungary to meet the 2012 deficit target of 2.5 percent of GDP.

The EU Withdraws the Suspension of Cohesion Fund Support, though Maintains the EDP

On May 30, 2012, the European Commission recommended that the proposed suspension of 29 percent of Hungary’s 2013 European Union Cohesion Fund subsidies be withdrawn due to the Orbán government’s recent revenue-generating measures that would enable it to meet the targeted 2012 deficit of 2.5 percent of GDP. However, the EC said that it would propose maintaining the Excessive Deficit Procedure against Hungary on the grounds that the Orbán government would keep its 2013 deficit under the 3 percent threshold only through unsustainable one-off measures. The Economic and Financial Affairs Council adopted the EC’s proposal on June 22, 2012.

On October 5, 2012, National Economy Minister György Matolcsy announced measures aimed at improving the 2013 government budget balance by 397 billion forints. The measures included the suspension of hiring to replace retiring public-sector employees for a period of three years, the postponement of planned 2013 wage increases for teachers until 2014 and the introduction a tax on ATM withdrawals.  Matolcsy said these measures would ensure that Hungary’s government budget deficit would remain under 3 percent of GDP in 2013.

On October 15, the European Commission announced that, according to its calculations, Hungary’s government deficit would be between 3.7 and 3.9 percent of GDP in 2013 even with the above budget-improvement measures.

On October 17, 2012, Matolcsy therefore announced 367 billion in additional budgetary corrections to ensure that the government deficit would remain below the 3-percent-of-GDP threshold in 2013, saying that “We consider it to be an economic absurdity, a political double-standard, but we are enacting new measures to improve the budget balance in order to preserve money from the Cohesion Fund.” The new measures rescinded the planned 50 percent decrease in the financial-sector tax in 2013 and doubled the financial-transaction tax introduced as part of the Kálmán Széll 2.0 Plan announced in April, among other things.

On April 22, 2013, Eurostat, the statics agency of the European Union, published final data showing that Hungary had a government budget-deficit of 1.9 percent of GDP in 2012. According to the Eurostat data, Hungary was one of ten European Union countries to have a deficit at or below the EDP threshold of 3 percent of GDP in 2012, while Germany was the only EU country to have a budget surplus that year.

EC Spring Economic Forecast: Hungary Good on 2013 Deficit, but above Target for 2014

On May 10, 2013, National Economy Minister Mihály Varga announced that in order to ensure that the European Union would lift its EDP against Hungary, the government would freeze 68.9 billion forints in budgetary funding for central-government bodies in both 2013 and 2014 and implement further budgetary-correction measures worth a total of 91 billion forints in the those years.

The EU Lifts the Excessive Deficit Procedure against Hungary

On May 29, 2013, the European Commission proposed removing Hungary, Italy, Romania, Latvia and Lithuania from the EU Excessive Deficit Procedure. The EC said that it had reduced its projected government budget deficits for Hungary to 2.7 percent of GDP in 2013 and 2.9 percent of GDP in 2014 as a result of the Orbán government’s budgetary corrective measures announced on May 10. The EU Economic and Financial Affairs Council approved this proposal on June 21, 2013, thus putting an official end to the nine-year Excessive Deficit Procedure against Hungary. Econfin’s removal of the five countries from the Excessive Deficit Procedure reduced the number of European Union member states subject to the EDP from 21 to 16.

Success! Hungary Was Victorious! The European Union was compelled to lift the Excessive Deficit Procedure in place against Hungary since 2004. This means that we will have access to all EU money due to Hungarians. THIS IS YOUR VICTORY over those both at home and abroad who wanted us to fail. (Orbán government advertisement that appeared in newspapers in Hungary after the EU lifted the EDP.)