1. Brussels is preparing to make a dangerous move. It wants to force us to annul the utility-fee cuts.

a. We should defend the utility-fee cuts. We should insist that Hungarian energy prices be determined in Hungary.

b. We should accept the plan of Brussels and rely on large companies to determine utility-fee prices.

2. Terrorist attacks have followed one after another in Europe over the recent period. In spite of this, Brussels wants to force Hungary to receive illegal immigrants.

a. In the interest of the security of the Hungarian people, illegal immigrants should be placed under supervision until the authorities can make a decision regarding their cases.

b. We should permit illegal immigrants to move freely in Hungary.

3. By today it has become apparent that, in addition to human traffickers, certain international organizations have encouraged illegal immigrants on their way to Hungary to engage in unlawful activity.

b. We should accept that there exist certain international organizations that can encourage the circumvention of Hungarian laws without consequences.

4. More and more foreign-supported organizations are operating in Hungary with the objective of interfering in the internal affairs of our homeland in a non-transparent way. Their operations could endanger our independence.

a. We should compel them to register themselves, disclosing the country or organization on behalf of which they are functioning and the objective of their operations.

b. We should permit them to continue to conduct their risky activities without supervision.

5. Job creation has been successful in Hungary over the past years because we took our own pathway. However, Brussels is attacking the job-creation measures.

a. We Hungarians should continue to decide regarding the future of the Hungarian economy.

b. Let Brussels decide what should be done in the economy.

6. Hungary has committed itself to cut taxes. Brussels is now attacking our homeland because of this.

a. We should insist that we Hungarians are able to decide on tax cuts.

b. We should accept that Brussels dictate the magnitude of taxes. 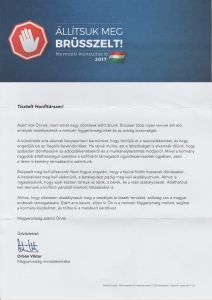 I am writing to you because we again stand before very big decisions. Brussels has come forward with several plans that endanger our national independence and the security of the country.

The bureaucrats want to force us to annul the utility-fee cuts and to receive illegal immigrants. If it was up to them, they would deprive us of the opportunity to decide ourselves regarding tax cuts and the means of job creation. Because the government would like greater transparency regarding the issue of foreign-supported agent organizations, we can expect heavy attacks in this domain as well.

We must stop Brussels! We will not permit them to make decisions above our heads. We must defend our borders, while we must prevent settlement [of migrants in Hungary]. We also insist that we keep the regulation of taxes, wages and utility fees in our own hands. We must make the networks sustained from foreign money transparent as well.

The help of the Hungarian people is needed in order for us to successfully hinder the dangerous plans of Brussels. This is why I am asking that You to stand up for national independence as well, assist the government in its struggle and to fill out the enclosed questionnaire.

Hungary is depending on You!

The prime minister of Hungary

Results and Cost of the Questionnaire 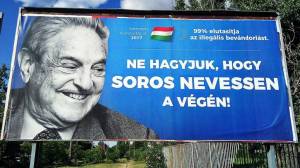 Let’s Not Allow George Soros to Have the Last Laugh! (photo: Szombat Online)

The Orbán government conducted three publicity campaigns in connection to the “Let’s Stop Brussels!” National Consultation featuring the following slogans that appeared on billboards and advertising columns throughout Hungary as well as in the country’s broadcast, print and digital media: in April and May, Let’s Stop Brussels!; in June, The Most Successful National Consultation of All Time. Hungary Is a Strong and Proud European Country (Minden idők legsikeresebb Nemzeti Konzultációja. Magyarország erős és büszke európai ország); and in July, Let’s Not Allow George Soros to Have the Last Laugh! (Ne hagyuk, hogy Soros György nevessen a végén!).

Cost of the Publicity Campaigns

According to data from the Prime Ministerial Cabinet Office, the government paid 7.25 billion forints (23.5 million euros) for the three publicity campaigns it conducted in connection to the “Let’s Stop Brussels!” National Consultation from early April until the middle of July (source in Hungarian). 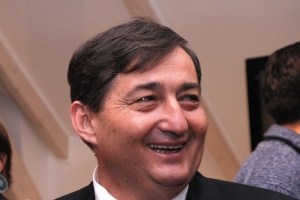 Furthermore, media that operate under the ownership of people with indirect or direct ties to the Orbán government generated slightly over 700 million forints in revenue from the publication and broadcast of such publicity (Ádám Matolcsy, the son of National Bank of Hungary Governor György Matolcsy, 380 million forints; Árpád Habony, Prime Minister Orbán’s chief strategic advisor, 261 million forints; and Mária Schmidt, director of the state-supported House of Terror, 62 million forints).

The print, broadcast and digital media operating under the ownership of the above six people thus received just over half of the 7.25 billion forints that the Orbán government spent on publicity for its “Let’s Stop Brussels!” National Consultation.