On June 5, 2014, over 100 commercial television and radio stations, websites and newspapers participated a Hungarian Advertising Federation-organized protest against a bill that Fidesz National Assembly representative László L. Simon submitted earlier in the week calling for the introduction of a progressive tax on advertising revenue (source in Hungarian). Between 7:15 p.m. and 7:30 p.m. on this date many of the commercial television stations and websites taking part in the demonstration showed blackened screens with messages expressing objection to the proposed taxes.

Fidesz previously proposed this tax in 2013, but dropped it presumably because the party did not want to have strained relations with the commercial media during the 2014 National Assembly election campaign. The slightly altered new version of the tax would begin at one percent on advertising revenue over 500 million forints and rise to 4o percent on advertising revenue of over 20 billion forints, or about 66 million euros (source in Hungarian).

TV2: “We Protest against Introduction of the Advertising Tax. Today we will suspend our broadcast between 7:15 p.m. and 7:30 p.m.” Estimated 2014 tax payment: 2.1 billion forints.

The tax appears to be aimed specifically at undermining RTL Klub, Hungary’s most-watched television station, which although politically neutral, broadcasts the kind of programs—American action movies, lurid serials and reality shows—that Fidesz and the Orbán administration want to roll back in favor of Hungarian nationalist culture. The station, owned indirectly by German mass-media corporation Bertelsmann, would pay an estimated 6.7 billion forints pursuant to the proposed tax in 2014, or about 63 percent of the expected 10.7 billion forints in total government revenue from the tax this year (source in Hungarian). RTL Klub would, in fact, likely be the only media outlet to pay the tax in its two highest brackets of thirty and forty percent.

RTL Klub announced shortly after Fidesz representative Simon submitted the bill that the proposed tax would threaten the station’s existence and, along with it, that of some of the most popular television programs in Hungary, such as the weeknightly 10-minute soap opera Barátok Közt [Among Friends] and the talent contest X-Faktor (source in Hungarian). 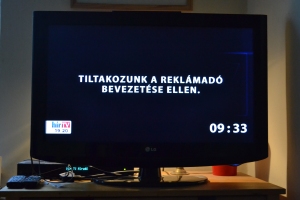 State Secretary in charge of the Prime Ministry János Lázár responded “RTL is threatening the country and blackmailing viewers and political officials. It would be good if they would practice this at home, in Germany, and not in Hungary” (source in Hungarian).

Not only opposition media have objected to the proposed advertising tax: pro-government television station HírTv and newspaper Magyar Nemzet also participated in the June 5 protest.

Fidesz caucus Chairman Rogán suggested that the party may be willing to make some minor changes to the bill, ostensibly to mollify criticism from pro-Fidesz media, though would not consider withdrawing the proposed legislation.

If the National Assembly adopts the Fidesz-sponsored advertising-tax bill in its present form, RTL Klub  will be severely weakened and may even be forced to cease operations. The proposed tax represents another blatant attempt by the Orbán administration to decrease the influence of the independent commercial media in Hungary, thereby increasing that of the pro-government state-run media. 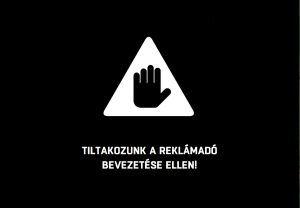