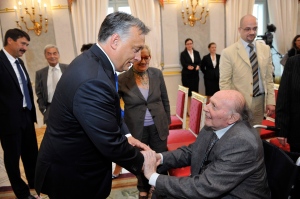 Kertész is the author of the Nobel Prize-winning novel Fatelessness, a semi-autobiographical work based on his experiences at the Auschwitz-Birkenau and Buchenwald concentration camps in 1944–1945.

Kertész is regarded as a liberal author in Hungary. The explicitly anti-liberal administration of Prime Minister Viktor Orbán presumably decided to present Kertész with the Order of Saint Stephen in honor of the government-sponsored Holocaust Remembrance Year commemorating the 70th anniversary of the deportation of around 500,000 Jews from Hungary to concentration camps in greater Nazi Germany during the spring and summer of 1944 (see official website in English).

Kertész accepted the award from President János Áder in spite of his sharply critical views of the Orbán administration. Speaking about Hungary in a September 2012 interview in the French daily newspaper Le Monde, Kertész said (source in French, Orange Files translation):

Nothing new in this country. The leader who fascinates: today one is in the same situation as during the era of János Kádár. Hungary is enchanted by Orbán like the Pied Piper of Hamelin. This goes back to something very profound. And, with me, to a true doubt. . . . The question that I ask myself is: why does Hungary always go wrong? . . . The current situation is nothing more than an illustration of this propensity for error. The Hungarian state is currently choosing to oppose Europe in the name of defending national interests, which can give the impression of a return to sovereignty. But, once again, this is a mistake. Nothing new. No problem. And no solution because there is no problem. . . . Hungary is an inevitability that has no meaning or explanation and is unique in Europe. Hungarians cling to their destiny. They will no doubt end up failing without understanding why.

In a statement released before the ceremony, Kertész said that “the desire and urgent necessity to establish concensus” had prompted him to accept the Order of Saint Stephen award from an administration for which he has expressed nothing but disdain in the past (source in Hungarian).

This is the same administration that maintains an official policy of strict opposition to all manifestations of anti-Semitism in Hungary, yet at the same time deflects blame for the mass deportation of Jews from the country in the final year of the Second World War from the Hungarian government onto the Germans both explicitly in the Fundamental Law and implicitly in the symbolism of the recently inaugurated German Occupation Memorial in Budapest. This is the same administration that has accorded official recognition to current journalists such as Zsolt Bayer, Ferenc Szaniszló and Péter Szentmihályi Szabó and past authors such as Cécile Tormay, József Nyirő and Albert Wass who have expressed overt anti-Semitism in their writings. 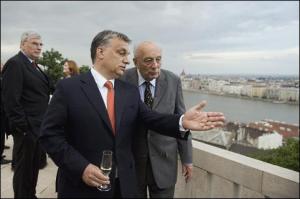 Prime Minister Viktor Orbán and historian John Lukacs  look out over the city of Budapest in May 2013.

The above actions have prompted U.S. authors and survivors of the Hungarian Holocaust Elie Wiesel and Randolph Braham to return Hungarian state awards. Many left-liberal Hungarians were disappointed that Kertész, who is dying of Parkinson’s Disease, chose to accept the Order of Saint Stephen from the Orbán administration—disillusionment reflected in the title of an editorial published on the opposition website index.hu on August 15: “Imre Kertész has Become the Government’s Holocaust Clown” (source in Hungarian).

Kertész is not the first elderly author from Hungary to accept honors from an administration that embodies the very authoritarian-populist politics that he strenuously opposed throughout his professional career: in May 2013, Hungarian-born U.S. historian John Lukacs was among six recipients of the Corvin Chain state award to attend an honorary dinner at the Sándor Palace along with Prime Minister Orbán and current Prime Ministry chief János Lázár during his “final visit to Budapest” (source in Hungarian).¹

The primary motive of the Orbán government for honoring Kertész and Lukacs is obvious: to make a show of support for Hungarian intellectuals who have gained high esteem in the liberal-democratic West in order to counterbalance the heavy criticism from that direction of the illiberal, quasi-Putinist system it is building in Hungary.

However, one wonders what factors impelled the 84-year-old Kertész and 89-year-old Lukacs to fraternize with the Orbán administration in what were very likely their final public appearances: Yearning? Resignation? Isolation? Degeneration?

The fate of very old men to make peace with the world before they leave it?

1-Lukacs did publish an editorial in the opposition newspaper Népszabadság in January 2014 in which he criticized the Orbán government’s rapprochement with Russia (see An Archconservative Speaks Out).