On February 28, 2014, Hungarian journalist Ferenc Szaniszló declared during his foreign-affairs program Világ-Panoráma [World-Panorama] on the pro-government television station Echo TV that Hungary must be prepared to reincorporate the Hungarian-inhabited regions of Subcarpathian Ukraine into the Hungarian state in the event that Ukraine collapses (see video in Hungarian and Orange Files transcription in English below):

I welcome our kind viewers from Paso Robles, California to Stavanger, Norway, from Rochester in the state of New York to Moscow. Whether it wants to or not, Hungary must prepare to take back Subcarpathian Ukraine, at least its majority Hungarian-inhabited parts located alongside the Trianon border. In the event that Ukraine falls apart, we cannot pretend that we have nothing to do with the Verecke Pass, Munkács (Munkacheve) or the Carpathians. The new political powers in Ukraine are limiting use of the Polish, Russian and Hungarian languages once again. And it doesn’t really console us that the European Union also supports the genocidal, Hungarian-killing Beneš decrees. The Russian, Polish and Hungarian inhabitants of Ukraine cannot satisfy themselves with the fact that the European Union is supporting the Nazis and financing the fascists. It is the deeply held desire of Brussels that the new Ukraine be nationalist against the Russians, the Poles and the Hungarians, though internationalist toward the repositories of surreptitious global financial power—the EU, NATO and the IMF. And all of this from our money, because Hungary is also an accomplice to the EU, NATO and the IMF.

Revision of the territorial changes stemming from the 1920 Treaty of Trianon, according to which Hungary lost two-thirds of its Austro-Hungarian Monarchy-era territory to the newly created or expanded states of Czechoslovakia, Romania, Yugoslavia and Austria, has been one of the greatest political taboos throughout the region of east-central Europe since the end of the Second World War. The only voices that have openly advocated the reincorporation into Hungary of Hungarian-inhabited territory in surrounding countries have been those of the radical-nationalist Hungarian fringe arising from extra-parliamentary political organizations such as the 64 Counties Youth Movement (Hatvannégy Vármegye Ifjúsági Mozgalom) and extremist websites such as Kuruc.info.

Ferenc Szaniszló, though notorious for his outlandish conspiracy theories and racist innuendo, is nevertheless much closer to the Hungarian political mainstream than others who have made similarly explicit irredentist statements. Echo TV, though only the 40th most-watched television station in Hungary, is the most popular pro-government news station ahead of the more moderate Hír TV [News TV] (source in Hungarian). The owner of the Echo TV channel that broadcasts Szaniszló’s twice weekly program is staunchly pro-Orbán media tycoon Gábor Széles, who has been one of the main organizers of the massive pro-government Peace March processions that have taken place in Budapest about every six months since 2012. 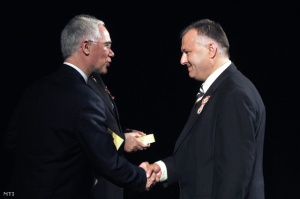 On March 14, 2013, Orbán government Minister of Human Resources Zoltán Balog presented Szaniszló with a state-sponsored Mihály Táncsics Prize in recognition of outstanding achievement in the field of journalism. However, after several days of sharp protest from the socialist and liberal opposition and the US and Israeli ambassadors to Hungary, Balog requested on March 19 that Szaniszló return the prize, claiming that he had been unaware of the highly publicized incendiary statements the journalist had made during his program over previous years, including an anti-Gypsy diatribe in February 2011 for which the National Media and Infocommunications Authority fined Echo TV 500,000 forints (1,800 euros) for violating regulations prohibiting incitement to hatred (source in Hungarian).

Szaniszló complied with the minister’s request, asserting during his following television program “Israel has triumphed over Ferenc Szaniszló” (source in Hungarian).

Although Prime Minister Viktor Orbán and the members of his administration have been very careful to avoid making statements that can be construed as irredentist and have never given any indication that they, themselves, maintain anti-Gypsy or -Semitic attitudes, Ferenc Szaniszló’s open reference to the possibility of territorial revision on February 28 and previous racist commentary during his television program on the pro-government television station Echo TV provide evidence of the direct connections that exist between the Orbán government and the exponents of radical Hungarian nationalism.