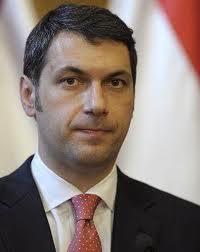 János Lázár has been a Fidesz National Assembly representative since 2002.

Lázár previously served as the head of the Prime Ministry from June 2012 until May 2018. Lázár initially filled this position in the rank of state secretary before becoming a cabinet minister when the office was elevated to ministerial status in the third Orbán government beginning in 2014.

Lázár, who was widely regarded as the second most powerful member of the third Orbán government, announced that he would not participate in the fourth Orbán government shortly after the prime minister stated during an interview that “I would preferably like to restructure the nerve center of government that they call the prime ministry. Here I would like another type of leadership” (source in Hungarian).

Lázár said that he chose not to take part in the fourth Orbán government because he wanted to focus on his duties as National Assembly representative. Lázár asked to be placed in the same last-row seat in the debate chamber of the Hungarian Parliament Building in which his mentor, former National Assembly representative and Hódmezővásárhely mayor András Rapcsák, once sat (source in Hungarian).

He did not pose in a group photo of National Assembly representatives from the Fidesz-Christian Democratic People’s Party governing alliance taken before the first session of the newly elected parliament on May 8, 2018 (source in Hungarian).

Grew up in the town of Hódmezővásárhely (population 47,000) in southern Hungary. Received a degree in law from Attila József University in Szeged (southern Hungary) in 1999.

Began his political career while still a university student, serving as the personal secretary to legendary Mayor András Rapcsák in his hometown of Hózmezővásárhely from 1997 until 1999.

Joined Fidesz in 2000 at the time of Prime Minister Viktor Orbán’s first cabinet.

“The birth of certain bank conglomerates over the past 20 years, how a major bank came into existence that appears to be Hungarian, what kind of impact its director exerts on the Hungarian economy, society and politics. How it envelops the country like an octopus—this is what should be talked about.” March 11, 2012, referring to OTP Bank, the biggest bank in Hungary, in interview with the newspaper Népszabadság (source in Hungarian).

“We reject that notion that LMP publish everything, including military and other documents representing national-security risks. And we consider it to be downright impudence that the descendant of one of the leading diplomats of the Kádár system and a communist collaborator submitted the LMP’s bill.” March 17, 2012, speaking with regard to Politics Can Be Different (LMP) Co-chairman András Schiffer’s bill aimed at making access to communist-era domestic-intelligence files open to all Hungarian citizens and in reference to Schiffer’s grandfather, Pál Schiffer, who filled high-ranking diplomatic posts in Oslo, Bern and Vienna during the Kádár era after having been the target of intra-party persecution during the Stalinist period (source in Hungarian).

“It would be good if the KDNP (Christian Democratic People’s Party) would face the fact that this is not a coalition government.” July 17, 2011, in reference to Fidesz’s party-alliance partner during an interview in the daily newspaper Népszabadság (source in Hungarian).

“I won’t be saying for the first time that [former] president Sólyom bears heavy responsibility on several accounts for the failure of the System Change.” February 9, 2013, referring to the criticism of former president of the Constitutional Court and president of the Republic of Hungary László Sólyom of the Fidesz-adopted Fundamental Law (source in Hungarian).

“Sándor Csányi is the number-one usurer in the country.” August 12, 2013, referring to OTP Bank Chairman-CEO Sándor Csányi (source in Hungarian).

“This is an increasingly smoothly working marriage of convenience that is offering greater and greater pleasure to both parties.” January 14, 2014, referring to Hungarian-Russian relations after the conclusion of an inter-state agreement to have state-owned Russian nuclear-power company Rosatom build two new nuclear reactors at the Paks Nuclear Power Plant in south-central Hungary with 10 billion euros in Russian credit (source in Hungarian).

“The Norwegian government reacted very hysterically, I can safely say, with regard to money distributed to civil organizations.” October 5, 2014, speaking about the government’s initiation of criminal proceedings against the Hungarian organizations that oversee the distribution of EEA Grant funding to NGOs in Hungary (see source in Hungarian beginning at 3:45).

“It could be that the Norwegians are having a hard time putting up with the fact that all the time and energy that they put into toppling the current government between 2010 and 2014 seems to have been wasted.” November 12, 2014, speaking to the pro-government weekly Magyar Demokrata regarding the Norwegian government’s criticism of the Orbán administration’s crackdown on organizations administering EEA Grant funding to NGOs in Hungary (source in Hungarian).

“A political veteran should think over carefully the degree to which he weakens us either out of personal offense or political considerations, because with this he is weakening himself, putting himself to death.” December 18, 2014, in interview with the weekly Figyelő, referring to the indirect criticism that Fidesz National Assembly Speaker László Kövér and caucus Deputy Chairman Zoltán Pokorni expressed regarding the luxurious lifestyles of several officials in Prime Minister Orbán’s inner circle, including Lázár himself (source in Hungarian).

“The demonstrations show that the American embassy seems to have assumed the role of the Hungarian opposition. It may appear that they have given up on the possibility that the opposition parties can ever win the confidence of the Hungarians, therefore they [the Americans] are the ones who have stepped up as the leaders of the malcontents.” December 22, 2014, during interview with website mandiner.hu (source in Hungarian).

“The lordly behavior of the young Fidesz officials is visibly a well-orchestrated political action by the opposition and the press. They want to formulate the image of us that we are the party of the rich and that we just support the rich. This is a lie!” December 22, 2014, during interview with website mandiner.hu (source in Hungarian).

“They regularly find people [migrants] infected with syphilis, hepatitis B, hepatitis C and HIV as well.” October 1, 2015, speaking about the migration crisis during regular Friday press conference (source in Hungarian).

“Let there be no misunderstanding—we do not want to deepen [European Union] integration any further. From our standpoint, the EU is primarily an economic community of values and interests—not a political one. However, they now want to force political values upon us. I accept that for them this is a value and I respect this as well, but Hungarian society cannot and will not accept this [idea] as its own. There was no question of this in 2004.”  December 24, 2015, during interview in opposition newspaper Népszava (source in Hungarian).

“The Visegrád Group [Poland, Czech Republic, Slovakia and Hungary] regards the new level of [European Union] integration with concern. Brussels wants to shove deepening integration down our throats and is using the immigrants to do this. We do not want to surrender any more of our sovereignty. The most important question over the next ten years from Hungary’s point of view is how much independence it will be possible to preserve. This is the essence of Fidesz policy—everything must be seen in this light. We want more Hungary and less Brussels.” December 24, 2015, during interview in opposition newspaper Népszava (source in Hungarian).

“We regard the new president [Donald Trump] and his government as a new beginning. The new presidency can be full of hope for the world in terms of economic stability and peace. Then we’ll see what the deeds show. One should neither underestimate nor harbor unrealistic expectations, though here is the chance for rebuilding relations [between Hungary and the United States].” November 10, 2016 (source in Hungarian).