March 4, 2019 By Orange Files in propaganda Leave a comment

On February 15, 2019, Spokesman István Hollik announced that the Orbán government would launch an “information action regarding the plans in Brussels to encourage immigration because we think that all Hungarian people have the right to know about those proposals that fundamentally threaten Hungary’s security” (sources A and B in Hungarian). 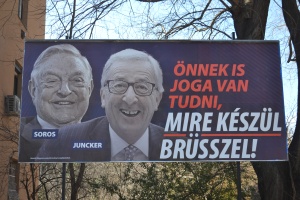 A few days later, signs showing unflattering images of Hungarian-American financier György/George Soros and European Commission (EC) President Jean-Claude Juncker alongside the text “You Also Have the Right to Know What Brussels Is Preparing to Do!” (Önnek is joga van tudni, mire készül Brüsszel!) appeared in large number on the streets of Budapest.

In late February, voters in Hungary received the following letter from Prime Minister Viktor Orbán providing more detail about “what Brussels is preparing to do”:

I am writing in order to inform You about the alarming developments in the immigration crisis.

Brussels has learned nothing from the dreadful terrorist attacks of the past years. It wants to bring even more immigrants to Europe. The bureaucrats are now preparing to stimulate immigration with new measures. Following the introduction of the migrant visa and the migrant bank card, they would give more money to György Soros’s immigration-supporting organizations. They continue to want to distribute immigrants in Europe through obligatory quotas.

We Hungarians decided that we do not want our homeland to became a country of immigration.

We want to protect our security and our Christian culture. This is why we built a fence and this is why we are defending our borders. However, the Brussels bureaucrats do not want to respect our decision. They want to break the resistance of the countries opposing immigration in the interest of reaching their objectives.

You also have the right to know what Brussels is preparing to do. This is why I am turning to you now: please read the enclosed information regarding Brussels’s planned steps.

According the “enclosed information” attached to Prime Minister Orbán’s letter, the European Union—cited in the third-person plural—is preparing to take the following steps:

1. They want to introduce the mandatory resettlement quota.

2. They want to weaken the border-protection rights of member states.

3. They would facilitate immigration with a migrant visa.

4. They want to give even more money to organizations supporting migration.

5. They would also assist migration with a bank card with accessible funds.

6. They would launch experimental immigration projects with countries in Africa.

7. They want to reduce financial support for countries that oppose immigration.

On February 19, the EC published the following response to the Orbán government’s signs on Facebook in both English and Hungarian: 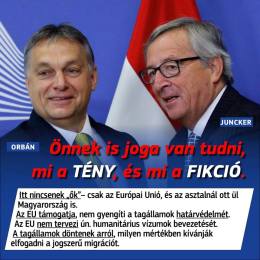 Leaders of the Conservative–Christian democratic European People’s Party (EPP) European Parliament political group with which the Fidesz–Christian Democratic People’s Party (KDNP) alliance is affiliated as well as leaders of other regional EPP member parties denounced the Orbán government’s “information action.” Among the EPP and EPP-affiliated national-party leaders who voiced such condemnation were the following:

Initiative to Expel Fidesz-KDNP from the EPP

As of March 1, nine parties¹ affiliated with the European People’s Party from seven different states indicated that they were prepared to initiate the expulsion of Fidesz and the Christian Democratic People’s Party from the EPP, thus surpassing the minimum of seven parties from five different states required to force a member party to leave the European Parliament political group (source A in Hungarian and B in English).

On March 4, European People’s Party President Joseph Daul announced that EPP officials would consider the initiative to expel Fidesz-KDNP in response to the the Orbán government’s current anti–European Union propaganda campaign at the party’s political assembly in Brussels on March 20 (source in English).

Daul remarked during an interview published in the German newspaper Die Welt on March 5 that Prime Minister Orbán “had crossed the red line” with his government’s current anti-EU campaign (source in German).

European People’s Party Group Leader Manfred Weber stated during an interview published in the German tabloid Bild on March 5 that Prime Minister Orbán would have to satisfy the following three conditions in order to prevent the expulsion of Fidesz-KDNP from the EPP: immediately and permanently halt his government’s anti–European Union propaganda campaigns; apologize for these campaigns to Fidesz-KDNP’s fellow EPP member parties; and guarantee the continued existence of the Central European University in Budapest (source in English).

Prime Minister Viktor Orbán characterized those who have denounced his government’s current propaganda campaign as “useful idiots”² in an interview published in the German newspaper Welt am Sonntag on March 2 (source in English):

Orbán: [. . .] in the political scientific literature they are characterized, following Lenin, as useful idiots. While they believe they are fighting an intellectual battle, they serve the power interests of others, of our opponents.

Orbán: Those who prefer a division of the EPP to its unity—yes. I have no sympathy for our Scandinavian EPP members, but I would never propose to expel them. I know that this would only be grist to the mill of the left [. . .]

Orbán stated during the interview that the government would replace the image of Jean-Claude Juncker on the signs with that of Frans Timmermans, the European Parliament Progressive Alliance of Socialists and Democrats party-group candidate for president of the European Commission:

In the next phase our party campaign will begin and then you will find someone else on the posters: Mr. Timmermans. We will send Mr. Juncker into retirement and Mr. Timmermans will replace him on our posters.

On March 3, Minister of External Economy and Foreign Affairs Péter Szijjártó made the following statement during an interview on the pro-government television station HírTV (source in Hungarian):

² The term useful idiot is commonly attributed to Vladimir Lenin and refers to somebody who unwittingly promotes the interests of a political force with which they are not affiliated.