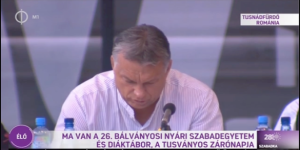 Thick neck sticking up out of his collarless non-Western shirt he talks again at the Fidesz “summer university” in Transylvania about the decline of Europe and the West and the fateful perils that face the Hungarian nation (and against which he, alone, can defend it). This year’s catastrophe: Muslim “illegal immigrants” who threaten to adulterate Hungarian Christian-nationalist culture and commit acts of terrorism and who have caused nothing but problems everywhere they have gone, such as Sweden, where the frequency of reported rape is the second highest in the world (behind Lesotho). “Europe is for the Europeans!” he says in his throaty voice, delivering the same old alarmist message that has had an astounding range of actors over the decades since he began with Li Peng, Pol Pot, Jaruzelski and Rákosi in 1989 (see Fill in the Blanks).