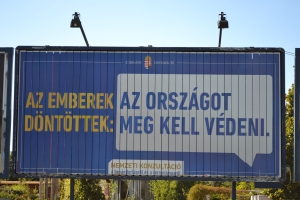 The People Have Decided: The Country Must Be Defended (photo: Orange Files).

The Orbán government has posted new anti-migration signs in Hungary reading “The People Have Decided: The Country Must Be Defended.” The government published the design of the signs on its Facebook site just hours after a few dozen of the two thousand migrants stranded in northern Serbia following the closure of the final gap in the Hungarian-Serbian border clashed with Hungarian police and Counter Terrorism Center commandos at the Horgos frontier crossing on September 16. The government announced earlier on this date that it would spend 381 million forints (1.2 million euros) on “information connected to the migration situation” (source in Hungarian)

The “People Have Decided” portion of the sign refers to the government’s May National Consultation on Immigration and Terrorism, a nominal survey that it sent to the eight million eligible voters in Hungary asking questions such as: “Would You support the Hungarian government if, contrary to the permissive policy of Brussels, it introduced stricter regulation of immigration?”; and “Would You support the Hungarian government if it introduced stricter regulation on the basis of which it would be possible to take into custody immigrants who cross the Hungarian border illegally?”

The significant majority of the slightly over one million Hungarians who responded to the questionnaire expressed strong support for the imposition of stricter measures to regulate immigration and control Hungary’s borders (source in Hungarian). Therefore “The People” who according to the Orbán government’s new anti-migration sign decided that “The Country Must Be Defended” represent around ten percent of the eight million Hungarian citizens who received the National Consultation on Immigration and Terrorism.

For information regarding the sealing of the final gap in the Hungarian-Serbian border see The Curtain Falls Again.