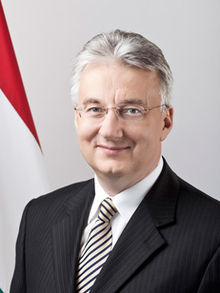 Zsolt Semjén has served as deputy prime minister and minister without portfolio in charge of national policy since 2010. He has been president of the Fidesz– affiliated Christian Democratic People’s Party since 2003.

Grew up in Budapest, where he graduated from high school in 1981. Worked at the Small Industry Production Company in Budapest from 1981 to 1984.

Earned a degree in theology in 1990 at the Roman Catholic Theological Academy in Piliscsaba, northwest of Budapest, and a degree in sociology at Eötvös Loránd University in Budapest in 1992.

Elected to National Assembly as representative of the Christian Democratic People’s Party (KDNP) in 1994. Left the KDNP following party schism in 1997, joining the Hungarian Democratic Forum (MDF) caucus following his mandatory half year as an independent.

Lost election for seat in the National Assembly in 1998 as MDF candidate. Served as assistant state secretary at the National Cultural Heritage Ministry during the first Orbán government,1998 to 2002.

Served as head of the KDNP National Assembly caucus during the 2006–2010 parliamentary cycle.

“Small, though loud interest groups simply want to force this—what is in my opinion deviant—concept upon the world. The natural order is that there are men and there are women. Consequently the natural order of the family is the committed relationship between a man and a women. If I start to relativize this natural order, which by the way exists according to Christian and Roman law, then the biggest problem is that there is no end to it. If two men get married, why not three? Then on what grounds do they punish bigamy? Where is the end of this? Then what is the aberration than cannot be a marriage?” June 21, 2014, during interview on the pro-government television station Hír TV (source in Hungarian).