May 24, 2018 By Orange Files in European Union, Hungary Leave a comment

The European Union provided Hungary with 26.54 billion euros in net funding (gross funding from the EU budget minus contributions to the EU budget) during the first six years in which the second and third Orbán governments were in power for the entire year (2011–2016).

Hungary’s average population was 9.9 million in the years 2011–2016 (source in English). Hungary thus received per-capita net funding of 2,681 euros over this six-year period. 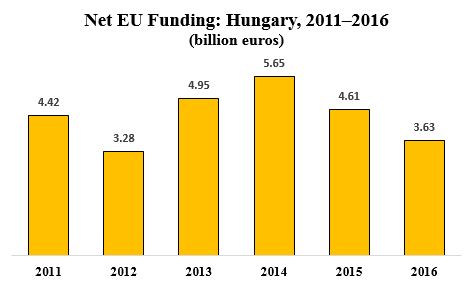 Prime Minister Viktor Orbán has claimed that European Union funding to Hungary serves to counterbalance the profit that Western companies derive as the result of the opening of the country’s markets to them. Prime Minister Orbán said during an interview published in the pro-government daily newspaper Magyar Idők on December 24, 2015 (source in Hungarian):

It is worthwhile to clarify whether we are really getting their [the European Union’s] money. After forty years of communism, central Europe undertook competition with the capital-rich big Western companies. We opened our markets in such a way as to provide Western companies with an enormous advantage and they were able to gain profit-generating positions in our economies that we could never acquire in theirs. In spite of the legal possibility of competition, the difference in the scale of capital has long made this an illusion. We get the sums [of money] that we get in order to counterbalance this. Moreover, the business profit that leaves Hungary for the West reaches the magnitude of the amount of support that arrives from there.