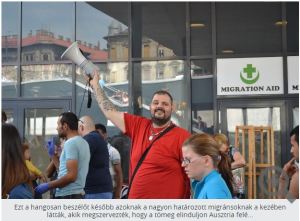 Orange Files photograph of Baba that ripost.hu used without citing the source.

On January 11, 2016, the on-line tabloid ripost.hu published an article entitled “Serial Criminal Ex-Convict at the Head of Soros’s Hungarian Migrant Organization!” (Börtönviselt, sokszoros bűnöző Soros magyar migráns­szervezetének élén!) regarding Baba, the most prominent volunteer for the Migration Aid non-governmental organization that provided food, clothing and other forms of assistance to tens of thousands of migrants as they passed through Hungary on their way to Germany in the summer and early autumn of 2015 (source in Hungarian).

The ripost.hu article claimed that Migration Aid, which started as a Facebook group in June 2015, was part of a “well developed Soros migrant-assistance network” that “following its establishment immediately received support from the Budapest Soros Foundation.”

The article used the following terms and phrases to describe Baba, an enormous man whom Western media such as The Guardian and the Associated Press dubbed the “Gentle Giant”: “refined criminal”; “serious criminal”; “dyed-in-the-wool swindler”; and “criminal well-known in the underworld.”