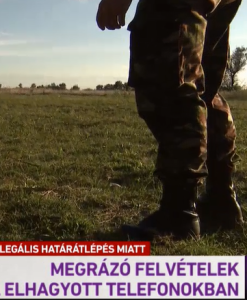 On October 9, 2015, state-run Hungarian Television broadcast a report on images and videos allegedly found on telephones that migrants discarded after crossing into Hungary near the village of Röszke along the Hungarian-Serbian border earlier this year. Hungarian Television reported three days previously that it had received the telephones containing the images from an anonymous resident of Röszke who had “helped the authorities as a civilian volunteer in their work at the border” (source in Hungarian from 7:54).

The October 9 Hungarian Television report is typical of those that Hungary’s state-run media has broadcast regarding the Great Migration regularly over the past few months in order to support the Orbán government’s contention that migrants represent a grave immediate threat to the security of Hungary and all of Europe.