“They regularly find people [migrants] infected with syphilis, hepatitis B, hepatitis C and HIV as well.” October 1, 2015, speaking about the migration crisis during his regular Thursday press conference (source in Hungarian).

“Eighty percent of the immigrants are young men. They resemble an army more than they do asylum-seekers. They are uneducated, the majority of them speak only Arabic.” October 2, 2015, speaking on pro-government Kossuth Radio (source in Hungarian). 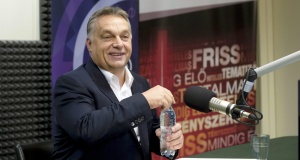