June 15, 2015 By Orange Files in photo gallery Leave a comment

On the afternoon of September 17, 2006, Hungarian Radio broadcast the following excerpt from a leaked recording of a private speech that Hungarian Socialist Party (HSP) Prime Minister Ferenc Gyurcsány had made to HSP officials a few months previously:

We fucked up (elkúrtuk). Not a little, but a lot. There is not another country in Europe where they’ve botched things up as we have. . . . Obviously we lied our way through the last year and a half, two years. It was totally clear that what we were saying wasn’t true. 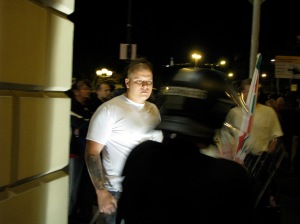 Within a few hours of the broadcast, thousands of people had gathered outside the Hungarian Parliament Building in Budapest to demand the prime minister’s resignation. During larger demonstrations at the parliament building the following evening, about 1,000 radical nationalists and football hooligans overwhelmed police guarding the nearby Hungarian Television headquarters, laying waste to much of the building in a fiery all-night rampage.

The eruption of political tension that had long been building in Hungary had taken place, setting off three years of anti-government demonstrations that in their expression of antipathy toward liberal democracy, the free market, the European Union and the West in general foreshadowed the spirit and ideology of the second government of Prime Minister Viktor Orbán that came to power in 2010.

Below are a some of the photographs that Orange Files took of participants in these anti-government demonstrations and other political events in Budapest over the period from September 2006 to September 2009. It is the first of a four-part gallery that will include photographs of demonstration leaders, cops, and signs and symbols.

Hungarists at rally honoring the fascist breakout attempt during the 1945 Siege of Budapest (2/12/2007).

Column of Hungarian Guard members proceeds through the City Park on its way to Heroes’ Square (3/15/2008).