May 26, 2015 By Orange Files in European Union, Juncker, Orbán Leave a comment 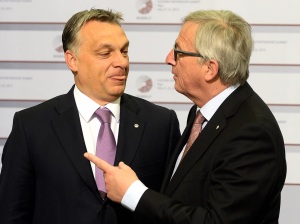 Standing on stage between Prime Minister Donald Tusk of Poland and Prime Minister Laimdota Straujuma of Latvia, Juncker commented in a loud, jocular voice as Prime Minister Viktor Orbán of Hungary approached: “the dictator is coming.” Juncker then extended his arm to shake hands and addressed Orbán directly as “dictator” and playfully slapped him on the side of the head (see video of greeting).

Many Hungarians, even those who oppose Orbán, voiced objection to Juncker’s condescending treatment of the prime minister. President Gábor Vona of the radical-nationalist Jobbik party wrote on his Facebook page (source in Hungarian):

I am also the leader of an opposition party, and I also have innumerable problems with Viktor Orbán and his policies, but this is an instance when I think that I must set my political affiliations aside. As a simple Hungarian citizen, I protest that which took place.

Obviously there are many lessons, everybody can draw their own. Two now occur to me:

1. Do they look at Hungary and its leader like this in the EU?

2. As Europeans, should we regard this person [Juncker]  as an authority and a leader?

At the other end of the political spectrum, Márk Herczeg of the liberal-democratic website 444.hu, one of the most popular and influential anti-Orbán media outlets in Hungary, wrote the following (source in Hungarian):

One does not have to be a specialist on protocol to see: Jean-Claude Juncker is a true moron. . . . Juncker has fallen to a level of boorishness unprecedented in the history of the EU, one that calls to mind Latin American dictators. . . . Who is leading Europe now, a lunatic or an enormous bumpkin? The scariest and most likely answer: both.

This is not the first time Juncker has publicly humiliated Orbán: in January 2015, the head of the European Union led Hungary’s prime minister off stage by the hand following a photo op in Brussels as if he were a child (see Back in the Fold?). In Juncker’s defense, he welcomed most delegation leaders to the May 2015 Eastern Partnership Summit in uncommonly casual and chummy terms (see video of all greetings). However, he reserved his only politically charged comment for Prime Minister Orbán, whom he—as many European Union officials—manifestly regards as an authoritarian renegade who has spurned the organization’s fundamental democratic ideals. Orange Files wonders based on the indignation that Juncker’s off-color greeting of Orbán in Riga aroused among Hungarians of diverse political stripes if growing European Union criticism and potential ostracism of Hungary’s prime minister might actually serve to enhance his political power rather than to undermine it?