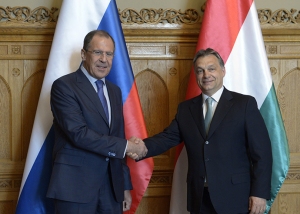 On November 7, 2014, both the New York Times and the website of the state-run television station Russia Today (RT) published articles about Prime Minister Viktor Orbán and his administration.

The title of the New York Times piece: “Defying Soviets, Then Pulling Hungary to Putin – Viktor Orban Steers Hungary Toward Russia 25 Years After Fall of the Berlin Wall.”

The title of the Russia Today piece: “The bullying of Hungary – the country that dared to disobey the US and EU.”

These articles are quintessential representations of the fundamental attitudes of the anti- and pro-Orbán camps, both inside and outside Hungary.

In short: globalist vs. anti-globalist; liberal vs. anti-liberal; pro-West vs. anti-West.

Presuming that the opinions expressed in the New York Times and Russia Today largely reflect those of the Obama and Putin administrations, respectively, the November 7 pieces in the NYT and RT also provide further evidence that Hungary has become a secondary theater, behind Ukraine, in the struggle between the U.S.-led North Atlantic Treaty Organization and Russia to retain or regain political supremacy in the post-communist states of eastern Europe.