Below is a screenshot of the well-visited Hungarian radical-nationalist website Kuruc.info from the morning of April 30, 2014: 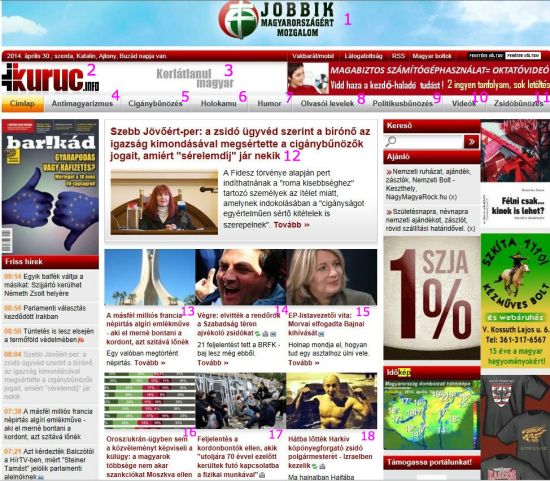 –The For a Better Future Trial: according to the Jewish Attorney, the Judge Violated the Rights of the Gypsycriminals with Her Proclamation of the Truth, for Which They Should Receive Damages (12)

–The Algiers Memorial to the One and a Half Million French Genocide—Those Who Dare to Pull Down the Cordon Are Riddled with Bullets. A Genocide that Really Did Take Place (13)

–At Last: the Police Carried Off the Oy-Veying Jews from Szabadság Square (14)

-The Foreign Affairs Ministry Does Not Represent Public Opinion in the Russian/Ukrainian Affair Either: the Majority of Hungarians Do Not Want Sanctions against Moscow (16)

12-Refers to attorney György Magyar’s assertion that Gypsies have the right to launch legal proceedings against Gyula Court of Justice Judge Dr. Erika Mucsi for allegedly racist statements she made about Gypsies in the court’s March 24, 2014 decision not to dissolve the radical-nationalist For a Better Future Self-Defense organization on charges that it has intimated the Gypsy populations of several communities in rural Hungary.

13- Alleged statement from Hungary’s Ambassador to Algeria Csaba Mohi regarding how police in Algiers would respond to trespassing at the site of the city’s Monument des Martyrs in reference to protesters having pulled down a cordon around the controversial memorial to the 1944 German occupation of Hungary under construction in Budapest (see What Is Truth?).

14-Reference to the police removal on April 29 of demonstrators from the site at which the German Occupation Memorial is being built in Budapest.

17-Reference to initiation of legal proceedings against demonstrators whom police carried away from the site of the German Occupation Memorial in Budapest.