The sign portrays the leaders of the three main parties that joined together to form Cooperation—Attila Mesterházy of the Hungarian Socialist Party, former prime minister Ferenc Gyurcsány of the Democratic Coalition and former prime minister Gordon Bajnai of Together 2014—posing for a collective mug shot along with a clown of unknown identity and former Budapest deputy mayor Miklós Hagyó, who is currently facing charges of corruption in connection to severance pay at the Budapest public-transportation authority BKV in what many consider to be another of the Orbán government’s show trials of former Hungarian Socialist Party officials. The text below the images reads “THEY DO NOT DESERVE ANOTHER CHANCE.”

The clown teacher on our sign is greeting his disguised associates who receive lessons from him every day and we can say that they are very good students: they have already earned excellent marks in clowning around. They are the parasites whom the voters smoked out in 2010 with the chief clown, Ferenc Gyurcsány, in the lead (source in Hungarian). 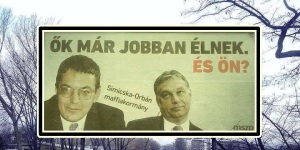 Csizmadia said that the Civil Cooperation Forum had financed the sign campaign through private donations, though declined to specify the amount of money the organization had paid to have the signs put up or the identity of the donor.

The Hungarian Socialist Party’s new political sign (above) is only slightly less brazen than CÖF’s, portraying Fidesz oligarch Lajos Simiscka and Prime Minister Viktor Orbán under the text “They Are Living Better. And You?” with the caption “Simicska-Orbán Mafia Government” slipped in between them.

The Civil Cooperation Forum and Hungarian Socialist Party signs presage a very contentious and mean election campaign this spring; they also symbolize the decline in the level of political discourse in Hungary to that of playground hectoring and reflect the patronizing attitude that political leaders in the country hold toward the national electorate. 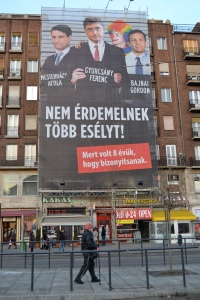