November 29, 2013 By Orange Files in Peace March Leave a comment 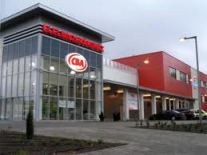 Shortly before this year’s national holiday celebrating the outbreak of the 1956 Hungarian Revolution, presidents and owners László Baldauf and Vilmos Lázár of the CBA grocery store chain, the second biggest in Hungary behind Tesco, sent the following letter to all of their thousands of stores throughout the country (see original in Hungarian):

On October 23 we are going to commemorate the heroes and martyrs of the 1956 revolution. This celebration creates a good opportunity for us to express our sympathy toward our national government.

This effort and unity are important because only in cooperation can we impede and categorically reject the machinations of the post-communist liberal scoundrels [gazember] who betray our homeland at every turn, serve the interests of foreign multinationals, all the while sacrificing the prosperity and development of the Hungarian people.

We ask all of those who are interested in the further strengthening and harmonious and systematic development of our homeland to come and participate with us in the Peace March and then listen to our Prime Minister’s holiday speech. It is important that all of us true patriots with nationalist sentiments support our greatest Hungarian political figure, the prime minister of our nation, Viktor Orbán.

The Peace March departs at 2:00 p.m from the Bem statue and will proceed along the Grand Avenue to the Oktogon and from there up Andrássy Avenue to Heroes’ Square.

We ask Esteemed Shop Managers to please inform all personnel of this letter and its important contents.

CBA Communications Director Attila Fodor said after the opposition newspaper Népszava published the letter on November 12 that it was a private summons from Baldauf and Lázár to their employees and that participation in the Peace March was in no way obligatory (source in Hungarian).

One can imagine that some CBA shop managers passed the message from the company’s owners on to their employees haphazardly, or maybe not at all.

One can also imagine that other CBA shop managers, either out of political conviction or self-interest, systematically informed their employees of the message, perhaps using the same spiteful and inflammatory language as that contained in the original letter.

And one can imagine that many employees working under the latter managers chose to participate in the October 23 Peace March (see The Soft White Underbelly) in order to win the favor of their superiors even if they do not support Fidesz.

This is an ethos with which Hungarians who were part of the national economy  before 1990 are all too familiar.