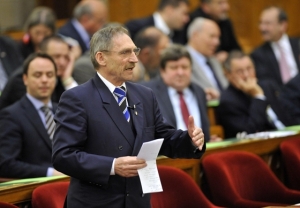 In September 2013, the Central Statistics Office published data showing that the number of employed people in Hungary rose by 67,000 from the summer of 2012 to a two-decade high of 3.98 million in the summer of 2013 (source in Hungarian).

The Orbán government trumpeted this happy fact as evidence of its successful employment policies. Following the publication of the data, the National Economy Ministry issued a communiqué stating that the rise in employment “reflects the success of the government’s economic policy. Government measures have succeeded in halting the fall in employment . . . “ (source in Hungarian).

This is absolutely true. The rise in employment in Hungary stems directly from the government’s policy.

Its policy of forcing people without jobs who want to retain their minimal unemployment benefits to take part in public work projects.

In July 2011, Fidesz–Christian Democratic People’s Party National Assembly representatives approved legislation reducing the period during which those who lose their jobs are eligible to receive primary unemployment benefits, called  “job-seeking support” (álláskeresési járadék), to three months from nine months and requiring those who receive secondary unemployment benefits of a smaller amount, called “employment-substitution support” (foglalkoztatást helyettesítő támogatás), or social support (szociális segély) to accept public work if offered or lose these benefits (source A and B in Hungarian).

Interior Minister Sándor Pinter, who sponsored the bill, said the legislation was aimed at encouraging the unemployed to return to the labor market and simplifying the system of state support (source in Hungarian). These changes went into effect on September 1, 2011.

In Budapest they sweep the streets, pick up trash in parks and shovel snow in the winter. In the countryside they also cut grass, clear brush and clean ditches and canals. Men and women in fluorescent shirts or vests armed with brooms, shovels, rakes and scythes. Those participating in government work-training programs also count as public workers.

They work six hours per weekday. Take-home pay is between 43,700 and 47,000 forints (147–159 euros) per month for unskilled public workers and between 56,000 and 60,000 forints (189–202 euros) per month for skilled workers. Public workers can be obliged to travel up to three hours per day to and from work at the expense of the state employer. If the government offers unemployed people public work at a location that is farther than an hour and a half from their homes, the employer must provide them with room and board (source in Hungarian). 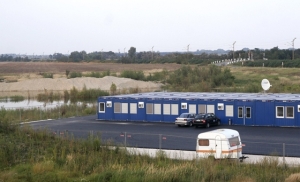 Temporary housing for those taking part in public-work projects.

National Economy Ministry State Secretary Sándor Czomba announced in the fall that the government would employ 200,000 Hungarians in public-work programs for the five-month period beginning on November 1—100,000 at six-hour-per-day jobs and 100,000 in four-hour-per-day labor-training (source in Hungarian).  The government’s 2014 draft budget allocates 183.8 billion forints (620 million euros) for public-work programs, up 20 percent from 2013, intended to employ between 250,000 and 300,000 workers (source in Hungarian).

The Truth Behind the Numbers

Central Statistics Office data shows that public workers accounted for over 60 percent of the rise in total employment to its highest level since 1992 recorded during the summer of 2013. If one uses the Interior Ministry data published on 444.hu regarding the number of public workers in this period, the number of people employed in Hungary decreased by more than 9,000 in the summer of 2013 as compared to the previous summer if one subtracts the increase in public workers.

Hungarians who work abroad though have left their families in Hungary also count toward the number of employed registered in the Central Statistics Office labor data (source in Hungarian). The number of such people increased 50 percent to 60,000 in the first two years after the Orbán government came to power in 2010 and accounted for one-third of the measured rise in employment in Hungary in 2012 and 30 percent of the measured rise in the second quarter of 2013 (source A and B in Hungarian).

In its communication to the general public, the Orbán government does not mention the fact that temporary workers earning measly wages to participate in public-work projects, many of them under the threat of losing all forms of state economic support, and Hungarians working abroad account for the entire increase in the number of employed people recorded in Hungary since it came to power. It does, however, recognize this fact in the information it provides to narrower target groups. The National Bank of Hungary, which under the leadership of former finance minister György Matolcsy has become an integral part of the Orbán government’s governing mechanism, admitted in its September 2013 inflation report, for example, that “Employment within the national economy has long been rising primarily as a result of public work and expanding work abroad” (source in Hungarian).

The Orbán government hails the recent rise in the number of employed in Hungary to a post-System Change high of nearly four-million as one if its successes, which along with its 20 percent cuts in utility fees provides evidence of its people-friendly policies. In fact, the increase in employment recorded in the country since Viktor Orbán came to power in 2010 is founded entirely upon the rising number of people employed in two categories that reflect the inability of his statist administration to create real jobs: public work-project employees and workers employed abroad. 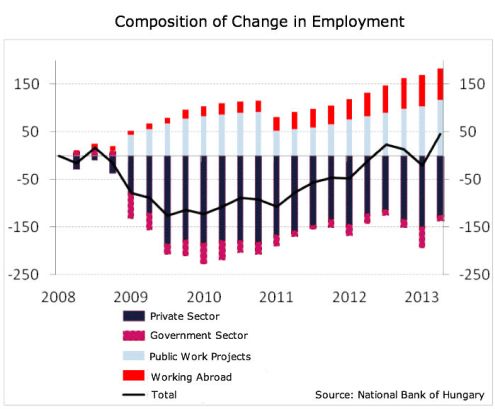