About 1,500 people showed up to the square between the foot of Castle Hill and the head of the Chain Bridge in Budapest on Sunday, September 29, to watch one of Hungary’s many opposition groups pull down a model statue of Prime Minister Viktor Orbán.

The average age of the crowd was about 55. The rapper Dopeman was the master of ceremonies, while Together 2014 leader and former prime minister Gordon Bajnai and some other minor opposition figures gave speeches in which they castigated Orbán in roughly the same coarse language as the current prime minister used to castigate Gyurcsány and Bajnai when he was in opposition.

“The fish stinks from the head,” Bajnai said. Bajnai’s subsequent comparison of the Orbán government to the communists did not excite the audience members, many of whom were themselves presumably members of the Hungarian Socialist Workers’ Party. Several of the speakers used the Orbánian opposition mantra “they lie, they steal, they cheat” (hazudnak, lopnak, csalnak). Dopeman called Orbán a “pile of trash” (szemétláda). He also sang a version of the Hungarian national anthem interspersed with the refrain “Fuck the Government! Fuck Orbán!” (Bazd meg a kormányt! Bazd meg Orbánt!). The elderly crowd clapped politely after the number.

Toppling the roughly 12-foot statue, which was molded and painted very skillfully to represent the Stalin statue pulled down in Budapest at the beginning of the 1956 Hungarian Revolution, was the highlight of the event. The statue was erected on a protruding part of the exterior wall at the entry of the tunnel passing under Castle Hill. The neck and the legs above the heavy boots were cut most of the way through from behind so it would break at those places. Dopeman threw a coil of rope tied around the statue at the other end into the crowd among a bunch of old ladies who didn’t know what to do with it. The statue came down suddenly, the photo missed. Orff’s “O Fortuna” from Carmina Burana sounded dramatically from the PA system. The Orbán-Stalin head rolled along the pavement, right to Dopeman, who gave it hard football kick. The boots remained on the pedestal just as planned, just as in ’56. Men hoisted the headless torso onto a truck and led a procession across the Chain Bridge to the House of Terror, where they planned to deposit the broken statue. 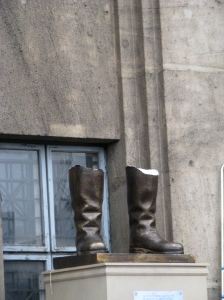