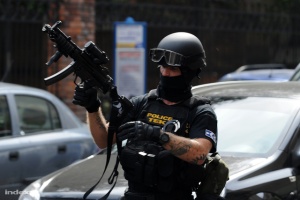 TEK officer responding to false alarm at the Budapest Technical University in September 2012.

On August 26, the Counter Terrorism Center (TEK) announced that it would extend until September 25 at the latest the closure imposed three days previously of the street where Prime Minister Viktor Orbán lives in Budapest (source in Hungarian). Though TEK specifically mentioned neither Orbán by name nor the grounds for closing off the area, the agency presumably did so in order to prevent groups advocating further government action to help foreign-currency debtors from repeating earlier attempts to demonstrate outside the prime minister’s house.

What are the differences between TEK and conventional secret services?

TEK operates not only as a security service protecting the prime minister, the president, their families, foreign dignitaries and other political officials, but as a special weapons and tactics (SWAT) agency that goes after pimps, drug dealers, bank robbers, hostage takers, murderers and, presumably, terrorists.

TEK needs permission only from the Orbán government’s Interior Minister or Minister of Justice and Public Administration to conduct searches and surveillance—it does not need to obtain authorization from a court (source in English).

The Orbán régime established TEK a few months after coming to power in May 2010. Orbán’s predecessors maintained only light personal security of the standard plain-clothes variety. The author passed within one meter of Ferenc Gyurcsány on several occasions while he was serving as prime minister (see short Orange Files video). TEK would not permit any unknown person to come anywhere near Prime Minister Orbán.

The head of the organization is Orbán’s longtime bodyguard János Hajdú (source in Hungarian).

This is the third time over the past nine months and the second time this summer that the Counter Terrorism Center has sealed off the area around Orbán’s residence at the foot of the Buda Hills. One can expect TEK’s role of providing personal protection for the prime minister to become increasingly prominent as he heads into his next term in office.