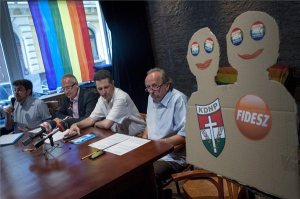 The 2013 Budapest Pride gay parade was held on July 6 amid tight security, as it has since radical right-wing demonstrators severely disrupted the event in 2007 and 2008. For the past five years, the Budapest Police has prevented protesters from assaulting Budapest Pride procession by stationing riot cops at heavy security fence erected on cross streets one block on either side of the parade route along its entire length. One can gain access to the parade only by passing through a security checkpoint at the beginning of the route on Heroes‘ Square. Otherwise, one cannot get closer than a football field in length to the parade as it proceeds down Andrássy Avenue to the center of the city. There have been progressively fewer and fewer demonstrators heckling paraders from afar under this hermetically sealed security arrangement. Only a couple of hundred right-wing protesters showed up for this year’s Budapest Pride procession, most of them belonging to a new radical nationalist group that calls itself Guards of the Carpathian Homeland (Kárpát Haza Őrei).

The Budapest Pride parade is a microcosm of the overall status of homosexuality in Hungary: tolerated, though only in sterile isolation from the heterosexual world and to a lesser degree since Prime Minister Viktor Orbán started pulling the political strings in Hungary as opposition leader more than six years ago. The Fundamental Law that Orbán and the Fidesz–Christian Democratic People’s Party (KDNP) administration adopted after coming to power in 2010 stipulates that marriage must be between a man and a woman, thus making Hungary the fifth European Union member state following Poland, Bulgaria, Latvia and Lithuania to constitutionally ban, by exclusion, same-sex marriage. (A sixth European Union member state, Romania, prohibits same-sex marriage in the country’s civil code.) Fidesz declined to participate in any of the Budapest Pride week events to which it was invited, sending nobody to represent the party at a roundtable discussion on gay rights in Hungary or to march in the annual parade.

Fidesz’s official stand on homosexuality is one of cold neutrality. A party communiqué to the news website Index.hu stated that “Homosexuality is a private affair that Fidesz does not want to make into a public affair. In connection to Budapest Pride, everybody has the right to participate in the event, just as they have a right to not participate in it.” In response to a question from the news website 444.hu whether Fidesz supported the Budapest Pride parade, party Communications Director Máté Kocsis said “Fidesz has no opinion on this question. I have not conducted a poll regarding who is going and who is not. Everybody will decide for themselves. I, myself, am not going to participate.” Asked about news that  Budapest Pride organizers planned to present him with a rainbow flag to fly temporarily outside city hall, de facto Fidesz Budapest Mayor István Tarlós said that “It would be better if they would refrain from this open provocation, because the mayor does not have the ways and means of placing this flag on city hall.” Tarlós earlier in the week pretended not to know what Budapest Pride was when a reporter from 444.hu asked him a question about the event. After being told what it was, he answered “I stand on the other side.”

Both Mayor Tarlós and Prime Minister Orbán declined invitations to participate in the Budapest Pride parade. This is understandable from a political point of view. Under the conditions of extreme political polarization that exist in Hungary, for them to attend an event that in political terms has traditionally been identified with the Budapest liberal élite would signify a concession to the opponent. Moreover, it would drive a certain number of Fidesz voters into the arms of the radical right-wing nationalist Jobbik party, which announced this week that if it ever comes to power it will ban Budapest Pride and other “deviant, provocative, exhibitionist programs.” However, in this instance Fidesz could still have sent lesser party representatives, even non-official known sympathizers, to attend the Budapest Pride events to which it was invited. Instead, only feigned ignorance, haughty standoffishness and rigidly noncommittal communiqués.

Throughout much of western Europe and North America national and city government officials openly support gay-pride events, often marching at the head of gay parades. Hungary, though a more traditional eastern European country, appeared to be proceeding in this direction during the first decade of Budapest Pride, which started in earnest in 1997. The reversal of progress in the area of gay rights in Hungary over the past seven years fits squarely into the overall pattern of democratic regression that has taken place in the country over that period. 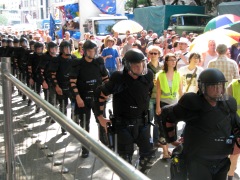